PHILADELPHIA (KYW Newsradio) — The Phandemic Krew is becoming almost as well known as the Phillies themselves.

Oscar Alvarado, Brett MacMinn and the rest of the Krew have gained popularity this summer for showing support and cheering on their team from just outside Citizens Bank Park on 10th Street, as the coronavirus pandemic prevented them for being in the stands this season.

Soon, you’ll be able to show support for the Krew, too — in the form of a bobblehead.

Amid the noise and viral videos, the Phandemic Krew has also been raising thousands of dollars for Phillies Charities with their merchandise. So, the daughter and son-and-law of Phils managing partner John Middleton presented them with an idea for a bobblehead that features Alvarado and MacMinn standing outside the ballpark, complete with their masks, T-shirts, air horn, ladder and championship banners.

Words cannot explain how thankful we are for Michael & Francie Fields, along with entire Middleton family & the Phillies organization. The plan was for Brett & Oscar to sit outside of the stadium with a radio. Who knew? @Phillies @FOCOusa #phandemickrew #blowthehorn pic.twitter.com/F6YPDGbSht

“We were floored, man,” said Alvarado. “To be honest, I was close to crying.”

The proceeds will also go to Phillies Charities. Alvarado said their first goal was to reach $25,000.

MacMinn hopes the bobbleheads will be made by the holidays. Pre-order details are forthcoming.

“I’m a Phillies collector as much as a fan, so to be an actual collectible, it’s unbelievable,” MacMinn added.

The two founding Krew members hope others will see what it means to be a Philly sports fan.

“We’re trying to change the narrative of how people look at a Philadelphia sports fan,” MacMinn explained. “We can gather and we can have a good time and be passionate, but behave.” 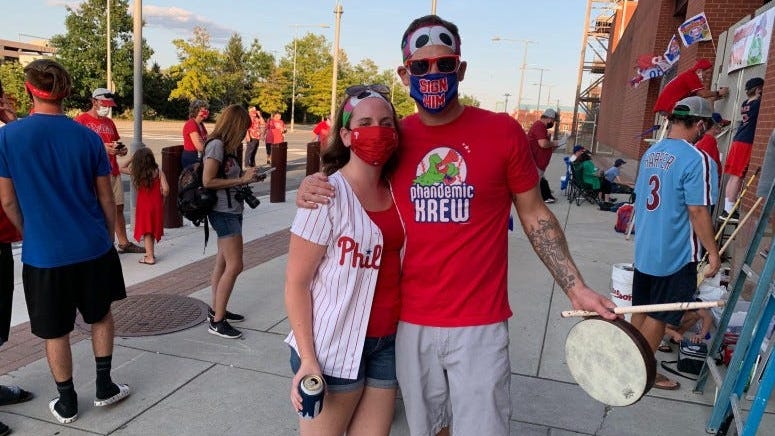 An up-close look at Phandemic Krew, making noise throughout MLB this season

music
Harry Styles new haircut is a call back to another era
music
After rapping about unemployment fraud, Nuke Bizzle got arrested
sports
In a few short weeks, Antonio Brown could be back in the NFL
music
Jim Carrey trends as some ‘SNL’ fans critique his Joe Biden impression and call for replacement
music
Richie Sambora blasts back at Jon Bon Jovi: 'Are you kidding me?'
music
Brian Wilson says he has 'zero' to do with Beach Boys performance at Donald Trump fundraiser