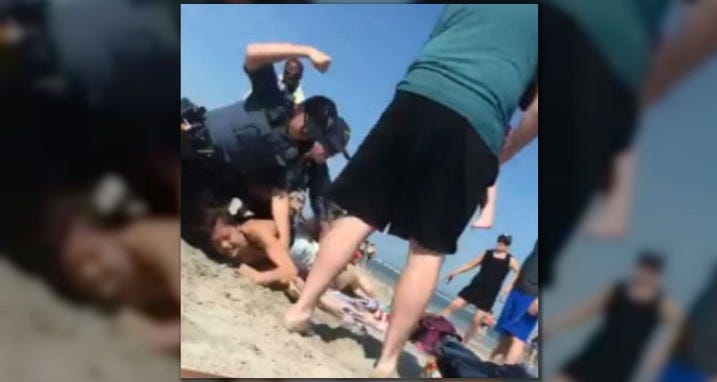 Wildwood has settled a federal lawsuit filed by Emily Weinman of Philadelphia, whose beach arrest was captured on video and went viral in 2018. The video shows a New Jersey police officer striking her several times following a disagreement over an unopened alcoholic beverage. Photo credit Alexis Hewitt/Twitter
By The Associated Press

WILDWOOD, N.J. (AP) — Wildwood has settled a federal lawsuit filed by a Pennsylvania woman whose beach arrest was captured on video in 2018.

Weinman, of Philadelphia, alleged that the two seasonal police officers “brutally and senselessly assaulted” her during the arrest over an unopened alcoholic beverage on the beach.

The lawsuit alleges that the officers exaggerated how much Weinman was resisting in order to justify the use of force.

In the video, Weinman can be heard screaming, “They’re choking me! I cannot breathe.”

Weinman, who was 20 at the time, was charged with assault, resisting arrest, throwing bodily fluids, disorderly conduct and obstructing justice. She pleaded guilty to a single disorderly conduct charge and was banned from Wildwood for a year.

Mayor Pete Byron said in an email Monday that he had just found out about the settlement.

“This was done by the Atlantic County Municipal Joint Insurance Fund which represents the City in City-related lawsuits,” Byron said. “I have no further comment.”