He had said he would choose a woman to replace the seat left by Justice Ruth Bader Ginsburg, a liberal icon who died last Friday at 87. Barrett was seen as his most likely choice.

Democratic presidential nominee Joe Biden reacted to the news minutes after the announcement, saying in a statement that Barrett "has a written track record of disagreeing with the U.S. Supreme Court’s decision upholding the Affordable Care Act. She critiqued Chief Justice John Roberts’ majority opinion upholding the law in 2012."

There had been multiple reports that Trump would chose Barrett, who currently serves as a judge on the 7th Circuit Court of Appeals. 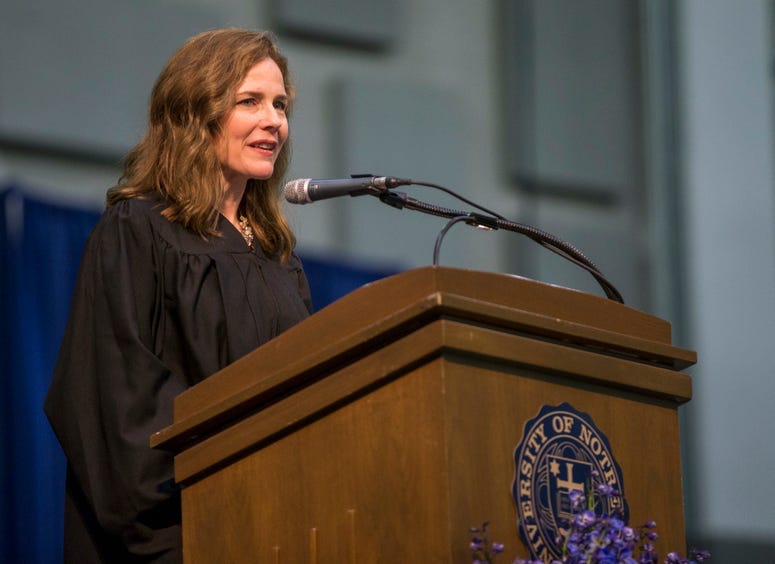 Trump was coy with reporters Friday evening when they asked him if the reports were true.

"I haven’t said that -- they're all great," the president said after disembarking from Air Force One at Joint Base Andrews.

"I haven’t said it was her, but she is outstanding,” he said of Barrett.

"Election Day is just weeks away, and millions of Americans are already voting because the stakes in this election could not be higher. They feel the urgency of this choice – an urgency made all the more acute by what’s at stake at the U.S. Supreme Court.

"President Trump has been trying to throw out the Affordable Care Act for four years. Republicans have been trying to end it for a decade. Twice, the U.S. Supreme Court upheld the law as constitutional.

"But even now, in the midst of a global health pandemic, the Trump Administration is asking the U.S. Supreme Court to overturn the entire law, including its protections for people with pre-existing conditions. If President Trump has his way, complications from COVID-19, like lung scarring and heart damage, could become the next deniable pre-existing condition.

"The American people know the U.S. Supreme Court decisions affect their everyday lives. The United States Constitution was designed to give the voters one chance to have their voice heard on who serves on the Court. That moment is now and their voice should be heard. The Senate should not act on this vacancy until after the American people select their next president and the next Congress."