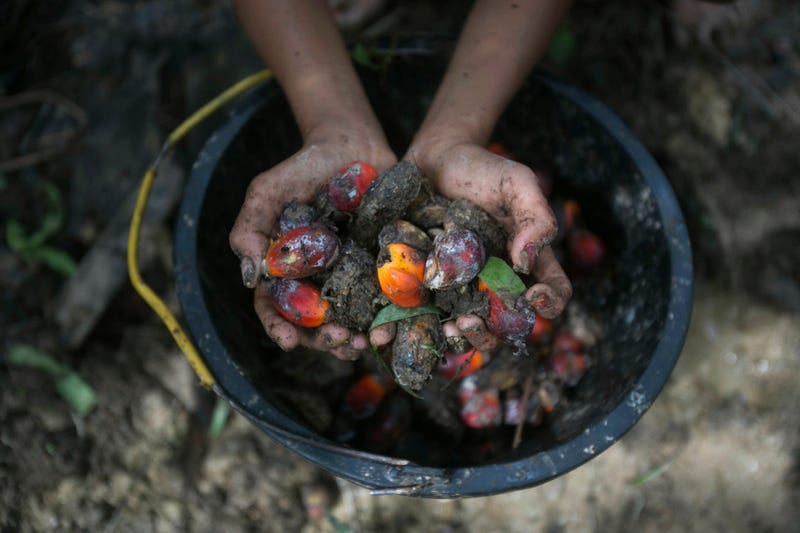 The United States will block shipments of palm oil from a major Malaysian producer that feeds into the supply chains of iconic U.S. food and cosmetic brands. It found indicators of forced labor, including concerns about child workers, along with other abuses such as physical and sexual violence.

The action, announced a week after The Associated Press exposed major labor abuses in Malaysia’s palm oil industry, was triggered by a petition filed last year by nonprofit organizations.

“We would urge the U.S. importing community again to do their due diligence,” Smith said, adding companies should look at their palm oil supply chains. “We would also encourage U.S. consumers to ask questions about where their products come from.”

Malaysia is the world’s second largest producer of palm oil. Together with Indonesia, the two countries dominate the global market, producing 85 percent of the $65 billion supply.

Palm oil and its derivatives from FGV, and closely connected Malaysian state-owned Felda, makes its way into the supply chains of major multinationals. They include Nestle, L’Oreal, and Unilever, according to the companies’ most recently published supplier and palm oil mill lists. Several huge Western banks and financial institutions not only pour money directly or indirectly into the palm oil industry, but they hold shares in FGV.

Smith said the agency carried out its own year-long probe and combed through reports from nonprofits and the media, including the AP’s investigation.

AP reporters interviewed more than 130 former and current workers from eight countries at two dozen palm oil companies — including Felda, which owns about a third of the shares in FGV. They found everything from unpaid wages to outright slavery and allegations of rape, sometimes involving minors. They also found stateless Rohingya Muslims, one of the world’s most persecuted minorities, had been trafficked onto Malaysian plantations and forced to work.

Many of the problems detailed by Smith mirrored those found by The AP. She said the Customs agency found indicators of restriction of movement on plantations, isolation, physical and sexual violence, intimidation and threats, retention of identity documents, withholding of wages, debt bondage, abusive working and living conditions, excessive overtime, and concerns about potential forced child labor.

After the U.S. ban, Malaysian palm oil producer FGV Holdings Berhad vowed to “clear its name.” FGV said all the issues raised “have been the subject of public discourse since 2015 and FGV has taken several steps to correct the situation.”

“FGV is disappointed that such decision has been made when FGV has been taking concrete steps over the past several years in demonstrating its commitment to respect human rights and to uphold labor standards,” it said in a statement.

FGV said it wasn’t involved in any recruitment or employment of refugees and doesn’t hire contract workers. Migrant workers are recruited through legal channels, and it said it ensured they are not charged fees.

As of August, FGV’s 11,286 Indonesian workers and 4,683 Indian workers formed the majority of its plantation workforce.

FGV said it is introducing the use of electronic wallet cashless payroll system for its workers. It doesn’t retain workers’ passports and has safety boxes throughout all its 68 housing complexes for them to keep their passports.

It said it had invested 350 million ringgit ($84 million) over the past three years to upgrade housing facilities, and provides medical benefits. It said it has a code of conduct that its suppliers and vendors are required to comply with, adding that any allegation of physical or sexual violence as well as intimidation or threats will be acted upon.

FGV said it has submitted evidence of compliance of labor standards to the U.S. CBP office since last year.

Felda and the Malaysian government did not respond to questions from AP about the findings of its investigation.

FGV Holdings has been under fire for labor abuses in the past and was sanctioned by the global Roundtable on Sustainable Palm Oil certification group two years ago. The association promotes ethical production -- including the treatment of workers -- with members that include growers, buyers, traders, and environmental watchdogs.

Though Asian banks are by far the most robust financiers of the plantations, Western lenders and investment companies have poured billions of dollars into the industry in recent years, allowing for the razing and replanting of ever-expanding tracts of land. Some hold shares in FGV itself — including Vanguard Group, BlackRock, Charles Schwab, State Street Global Advisors, HSBC, and even the California Public Employees’ Retirement System — according to the financial data analysis firm, Eikon.

The AP did not receive comment from any of those financial institutions on Wednesday, but when asked more broadly about their ties to the palm oil industry last week, most responded by noting their policies vowing to support sustainability practices, with many also incorporating human rights into their guidelines.

Multinational food and cosmetic companies responded in a similar way last week, saying they do not tolerate labor and human rights abuses and will immediately investigate complaints they receive and take action, including suspension of a supplier, if necessary.

This is the first time Customs has issued an order related to palm oil, though shipments from other sectors have been detained after similar investigations into forced labor were conducted. They include seafood, cotton and human hair pieces believed to have been made by persecuted Uighur Muslims inside Chinese labor camps.

Under Wednesday’s order, palm oil products or derivatives traceable to FGV will be detained at U.S. ports. If the company is unable to prove that the goods were not produced with forced labor, it can be exported.

“For all these years these companies have refused to pay for remediation or publicly cut ties with FGV, so now the U.S. government has acted for them,” said Robin Averbeck of the San Francisco-based Rainforest Action Network, which was among a group of nonprofits that filed one of two petitions against FGV last year. “Procter & Gamble and other brands must stop paying lip service to human rights and address forced labor and other labor abuses once and for all.”