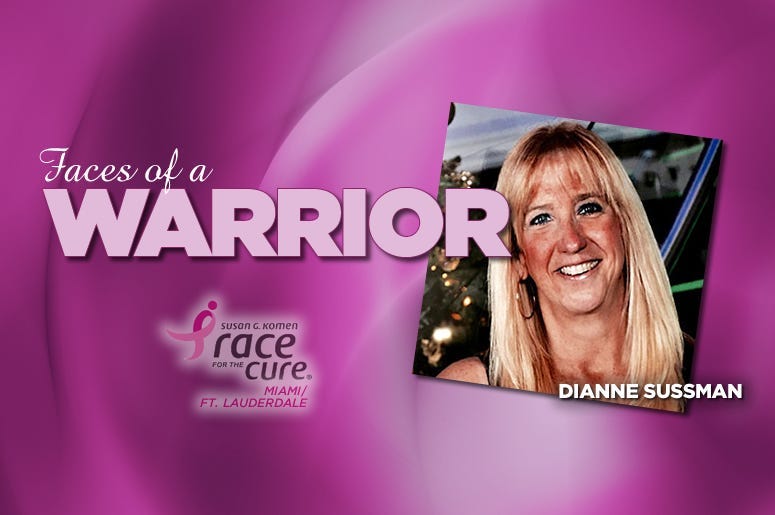 July 10, 2016 07/10/2016 4:00 am
Age:  55Profession: Pediatric Nurse (Specializes in Oncology)Type of Breast Cancer: Ductal Carcinoma In Situ with features of Tubular carcinomaNumber of Years as a Survivor: 7 yearsRelationship to Susan G. Komen:  Race ParticipantMy name is Dianne Sussman and I am a breast cancer survivor. I never imagined I would be diagnosed with breast cancer, but on November 11, 2009, I received the call no one should ever get telling me I had Stage 1 breast cancer. In that moment, I only heard the word "cancer," nothing else.Prior to being diagnosed, I had gone for my routine mammogram, as I did each year, and it came back negative. I explained to the doctor that I was having a lot of pain in my breast and I knew it wasn't normal. She insisted it was probably nothing, but because I kept insisting something was wrong, she gave me a prescription for an MRI. That same week, I went for my MRI and the radiologist who was reading it saw something and wanted me to have an ultrasound. I walked across the hallway and had the ultrasound done right away. The radiologist asked me to have a biopsy done because they saw something and didn't know what it was. Though they told me that someone would be calling me to make an appointment for my biopsy, I went straight home and made my own appointment. I wasn't waiting.After the biopsy was performed, I asked the physician if she saw anything and of course she stated she didn't have the results. As a Pediatric Oncology Nurse for almost 20 years, I knew based on the blank expression on her face that she was aware of the preliminary results. I had seen and used that same blank stare numerous times before.On November 11, Veterans Day, I took the call that would change my life forever. My battle with cancer was about to begin and I was scared. Fortunately, I would be one who battled and won and would became a veteran in the fight against breast cancer.After going to two oncology surgeons and two plastic surgeons, I chose to have a double mastectomy, which totally surprised them. This was my choice after seeing some of the children I had treated over the years relapse from other cancers. I didn't want to go through this physical or mental journey again.I had tons of support from my family, friends, and colleagues who encouraged me, as well as kept my life as normal as possible. After all my reconstruction surgeries (six in total) were completed I began traveling again and I will continue traveling. One of the things that helped me through this journey has been to volunteer as a nurse for a children's oncology camp, which is very rewarding. At this stage of my journey, being able to share my experiences as a fighter, caregiver (to family and patients) and a nurse who administers chemotherapy is also very rewarding.In 2013, after coming back from a trip, my younger sister announced that while I had been away she had a biopsy and was diagnosed with breast cancer. I was devastated at the thought of telling our mother that her younger daughter also has breast cancer. Together, we told our mother who responded with, "We got through it once, we will do it again." And WE DID.Prior to either one of us getting cancer, I had been a supporter of Susan G. Komen’s annual 5K Race and community events. Since then, I have become more aware of the color pink and what it represents to me and thousands of men and women. Together, I believe we can find a cure for breast cancer and end it._______________________________________________About the Faces of a Warrior CampaignLast year, to celebrate the 20th Anniversary of the Komen Miami/Ft. Lauderdale Race for the Cure®, Susan G. Komen Miami/Ft. Lauderdale teamed with 101.5 LITE FM to launch the Faces of a Warrior campaign. To mark the 21st Annual Race for the Cure®, Komen is spotlighting 21 survivors to represent each year the Race has run. These individuals are sharing their stories of strength and resilience -- not just of surviving breast cancer, but thriving in spite of it.Read the stories of more Warriors hereFor more information on the Faces of a Warrior campaign -- and other ways you can get involved in the Race for the Cure® -- please email info@komenmiaftl.org or call 954-909-0454