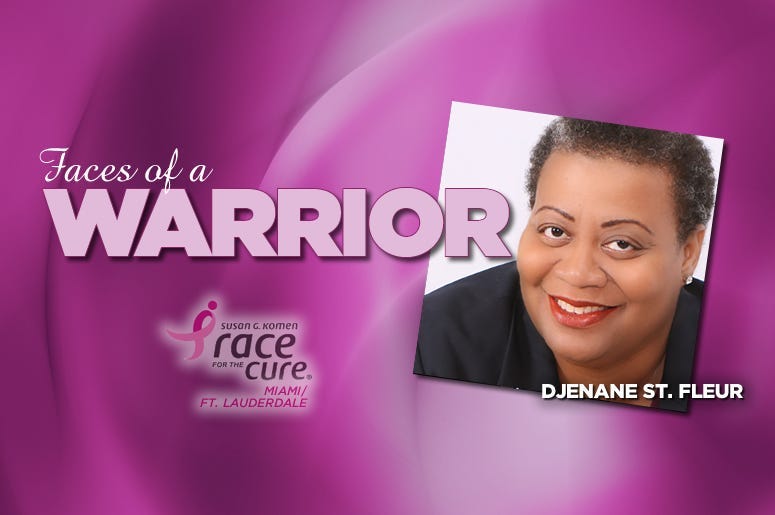 August 7, 2017 08/07/2017 2:46 am
Age: 46Profession: Electrical Engineer; Consultant; Radio HostType of Breast Cancer: Stage III Breast Cancer in 2004; Stage IV in 2015Year of Diagnosis: 2004, 2015Number of years as a survivor: 12 yearsRelationship to Susan G. Komen: Komen volunteer, Race participant, Komen GranteeIn June 2004, I was diagnosed with Stage III Breast Cancer, which required surgery, chemotherapy, and radiation.  After my recovery, I made a decision to take my story public and have since shared my breast cancer journey by becoming a prominent voice in the community. An eternal optimist, I decided to turn my diagnosis into an opportunity to educate and to promote early detection. As an advocate for over 10 years, I seek to reach out to young women and men who may not understand that early detection saves lives and that in advocating: “the life that you save may be yours.” For the past 12 years, I have been on a weekly radio show called Prekosyon Pa Kapon, talking to the Haitian community about breast cancer. I have also organized health fairs and social events to bring more awareness about early detection, treatment options, recovery, as well as life after surgery. For a long time I was opposed to being called a survivor. Diagnosed at 33 years of age, I felt that I would have to be conscious of every decision I made for the rest of my life. It was not until one friend bluntly explained that, “A cancer survivor would be someone who a) has cancer and b) is not dead” that I changed my perspective from death sentence to viewing the diagnosis as a life altering situation. It took months, even years, to grow with the process of survivorship; at time I remembered pensively “Wow I came a long way.” I must be honest in saying that the process of healing is not linear; I have experienced highs and lows. During my high times I praise God; and when faced with low times, I work on recognizing my resilience and courage.I initially defined survivorship as crossing the finish line to remission. Yet 12 years later, the cancer metastasized. In December 2015, while following up with my doctors about the genetic test I finally decided to go through with, I was told of a recurrence of the breast cancer. The results came back positive for BRAC2 and the doctors suggested a 6-session of chemotherapy with PET scanning to determine other more aggressive treatment options. I am currently in remission so I can say that I survived cancer twice!I will continue advocating for breast cancer, while sharing my new diagnosis with faith so that more will join the movement. I hope to write a book about my journey, so that other women may also find their courage to keep strong. In my long and short term decision-making, I tend to be more flexible with time. When I engage myself in certain projects, I find that my survivorship has opened my mind to welcome more collaboration. I attribute God for getting me through my battles with cancer. I have faith that He has a bigger plan for me, and I will be able to deliver through His grace._______________________________________________About the Faces of a Warrior CampaignIn 2015, to celebrate the 20th Anniversary of the Komen Miami/Ft. Lauderdale Race for the Cure®, Susan G. Komen Miami/Ft. Lauderdale teamed with 101.5 LITE FM to launch the Faces of a Warrior campaign. To mark the 22nd Annual Race for the Cure®, Komen is spotlighting 22 survivors to represent each year the Race has run. These individuals are sharing their stories of strength and resilience -- not just of surviving breast cancer, but thriving in spite of it.Read the stories of more Warriors hereFor more information on the Faces of a Warrior campaign -- and other ways you can get involved in the Race for the Cure® -- please email race@komenmiaftl.org or call 954-909-0454

news
Getting help via 911 may take 2-3 minutes longer now
music
RADIO.COM's Back To Back: Kelsea Ballerini, Meghan Patrick, and Ingrid Andress
sports
LeBron James does chalk toss, scores 46 points in first game back in Cleveland since 2018
sports
NBA discussing possible All-Star Game for mid-March in Atlanta: report
news
VIDEO: House delivers article of impeachment against Trump to Senate
sports
Lions fans show thanks for Matthew Stafford with donations to his favorite charity