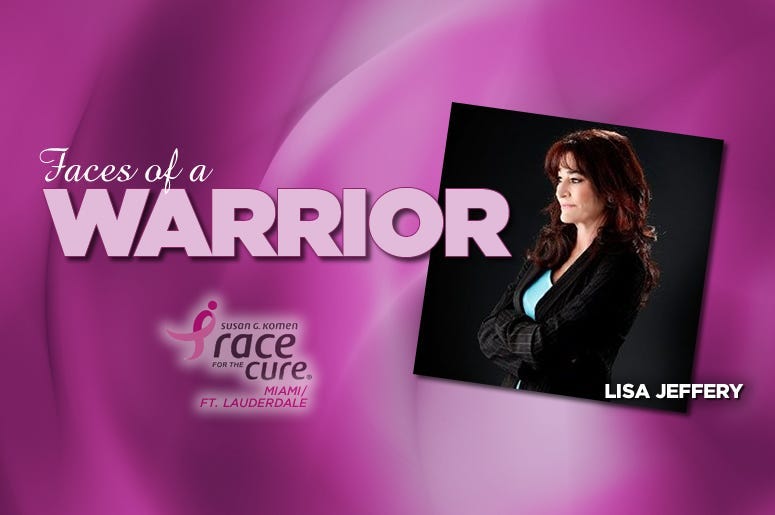 May 29, 2016 05/29/2016 12:59 pm
Age: 54Profession: Executive Speech CoachType of Breast Cancer: Triple NegativeYear of Diagnosis: 2015Number of years as a survivor: 1 yearRelationship to Susan G. Komen: New to KomenMy name is Lisa and I am a breast cancer survivor. When I was first diagnosed with breast cancer I was lost, scared and totally devastated. Though I had a strong faith in God, I didn’t know how to ask him for help. I am a professor of public speaking and an executive speech coach, and yet I could not find the words to speak to God. And so I called my priest and we found the words together. At that moment, I felt a calm come over me and I was able to go into my double mastectomy at peace.With my surgeries behind me, and chemo underway, I tried to focus on the projects I was working on. I began compiling and editing a book on the history of my family. This helped give me focus and purpose when life was difficult. I also started wearing a tiara to remind me that I was a princess even during the worst time of my life. I wore it often, especially when I was sick in bed from the chemo. And when my faith, my projects and my tiara didn’t do the trick, I relied on my family, friends and colleagues. Their support was really what kept me going through this hard battle. I am a Woman Veteran who served as an officer in the Air Force during the First Gulf War. During my battle, fellow veterans that I knew helped me become a warrior with cancer. They sent me their warrior insignia, fighter pilot wings, tank insignia. Lieutenant, captain and colonel bars, and I put them on my “chemo hat.” The hat was heavy, but I knew it carried power. With it on, I felt like a true warrior. One fellow veteran even gave me their Purple Heart and Distinguished Cross to wear during chemo, and I just knew that with this army of support, there was no way I was going to lose my fight.Through it all, I realized that being a survivor means I have been given a second chance at life. My mother died of breast cancer eight years ago, so I had to look deep inside my soul and find the strength to fight extra hard for me AND for her. I found strength I didn’t know I had. Being a survivor means I made it in the most difficult race of my life. It also means that I need to use my strength and courage to help other women in their fight. It means that I join the ranks of women of courage, grit, resolve, tenacity and love. Breast cancer affected my life profoundly, as I’m sure it does for all women diagnosed. I am different now – stronger, braver, with a resolve and zest for life I never had before. I have fewer doubts, more gratitude, and live life more purposely than ever before. I guess you can say that I live life on a different level now. For all it took away, breast cancer gave me that. _______________________________________________About the Faces of a Warrior CampaignLast year, to celebrate the 20th Anniversary of the Komen Miami/Ft. Lauderdale Race for the Cure®, Susan G. Komen Miami/Ft. Lauderdale teamed with 101.5 LITE FM to launch the Faces of a Warrior campaign. To mark the 21st Annual Race for the Cure®, Komen is spotlighting 21 survivors to represent each year the Race has run. These individuals are sharing their stories of strength and resilience -- not just of surviving breast cancer, but thriving in spite of it.Read the stories of more Warriors hereFor more information on the Faces of a Warrior campaign -- and other ways you can get involved in the Race for the Cure® -- please email info@komenmiaftl.org or call 954-909-0454