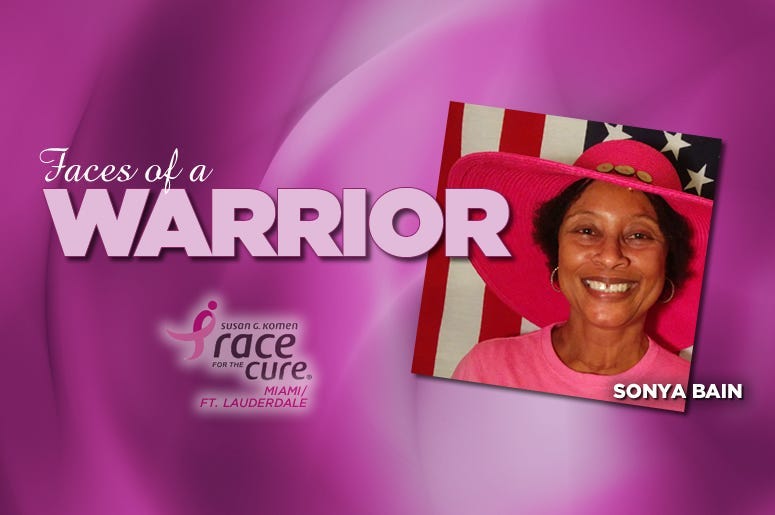 August 1, 2016 08/01/2016 12:27 am
Age: 63Profession: Retired Educator / Administrator at Miami Dade College North CampusType of Breast Cancer: Triple Negative Breast CancerNumber of years as a survivor: 10 yearsRelationship to Susan G. Komen: Received services from Komen granteeMy name is Sonya and I am a breast cancer survivor. My fight against cancer started at 27 years old, when my first mammogram revealed a benign lump. In the years that followed, I had to have numerous needle aspirations to remove cysts and calcifications. Nonetheless, I was committed to living as healthy a life as possible - I ate well, I exercised regularly, and made sure to get a mammogram every 6 months.In September of 2005, I had surgery to remove yet another a cyst and was told to return in one year. A month later, however, I noticed another lump in my breast. Another month passed and the lump was still there. A small voice inside told me to get it checked out, but I ignored it and decided to celebrate Thanksgiving instead. I waited until after the Christmas holiday to contact my doctor, and finally made an appointment in January 2006. Once my doctor reviewed my test results and completed a clinical breast exam, he recommended a biopsy.The day after my biopsy, at 53 years old, I received the call no one wants to get. After so many years of staying on top of my breast health, I was diagnosed with breast cancer while I was alone at home.  All I remember was thinking, “I’m going to die.” Luckily, my doctor talked me through the shock and told me that had I waited until the next year to get my check-up, I may have died. That statement was an eye opener for me. I knew then that I was lucky to have had the Holy Spirit guiding me to get checked. The months that followed were almost a blur. My doctor recommended a surgeon, and while I waited for my appointment I did all I could to get informed. I remember walking into my appointment with my Oncology Surgeon and noticing the grim look on his face. His nurse came into the room to offer support as he delivered the “bad news” - that I had Triple Negative Breast Cancer.  But I was ready this time, I had my daughter, my fiance, and a longtime friend with me. I was not alone. The doctor and I discussed my options and decided that due to my medical history the best course of action was a bilateral mastectomy. After the surgery, I thought the cancer was gone for good, but my post-op check-up revealed otherwise. I was told I had a 30% chance of recurrence because of the Triple Negative Breast Cancer diagnosis. At this point, I was just mad, enraged. It wasn’t the first time since my diagnosis that I felt this, but this time I was mad at cancer. How dare this foreigner think I would sit back and not fight? So I fought. I chose to proceed with aggressive chemotherapy, which became the most difficult chapter of my life. I lost my hair, gained weight, my pigmentation changed, I had sores in my mouth, developed neuropathy, dealt with an aching back and aching bones, and suffered memory loss. During this particularly difficult time in my life, two of my colleagues at Miami-Dade College where I had worked for 20 years, Nancy Wilson Young and Wanda Curtis, embarked on a remarkable effort. They spearheaded a donation drive where colleagues college-wide, donated their sick and holiday time to me so that I could direct all my energy to beating cancer, and still have the income I needed to live. They donated enough for 10 months of leave! The pastors and members of my church also encouraged, prayed and supported me throughout my cancer journey. I felt more love and support than I had ever before. And then and there, I knew I would continue to fight. I knew I would get better. Ten years later, I am still here and I continue to pay it forward. I became involved with The Beautiful Gate, a Cancer Resource Center that received grant dollars from Susan G. Komen. In my capacity there, I have been able to touch the lives of so many women with breast cancer. I also head a Connect Group, Victory in Christ, at Trinity Church that assists individuals who are suffering physically and emotionally due to illness or life circumstances. Despite the hardships I have faced, I thank God for my cancer journey and I am proud to be a comrade to women and men who are facing breast cancer._______________________________________________About the Faces of a Warrior CampaignLast year, to celebrate the 20th Anniversary of the Komen Miami/Ft. Lauderdale Race for the Cure®, Susan G. Komen Miami/Ft. Lauderdale teamed with 101.5 LITE FM to launch the Faces of a Warrior campaign. To mark the 21st Annual Race for the Cure®, Komen is spotlighting 21 survivors to represent each year the Race has run. These individuals are sharing their stories of strength and resilience -- not just of surviving breast cancer, but thriving in spite of it.Read the stories of more Warriors hereFor more information on the Faces of a Warrior campaign -- and other ways you can get involved in the Race for the Cure® -- please email info@komenmiaftl.org or call 954-909-0454

news
Getting help via 911 may take 2-3 minutes longer now
music
RADIO.COM's Back To Back: Kelsea Ballerini, Meghan Patrick, and Ingrid Andress
sports
LeBron James does chalk toss, scores 46 points in first game back in Cleveland since 2018
sports
NBA discussing possible All-Star Game for mid-March in Atlanta: report
news
VIDEO: House delivers article of impeachment against Trump to Senate
sports
Lions fans show thanks for Matthew Stafford with donations to his favorite charity