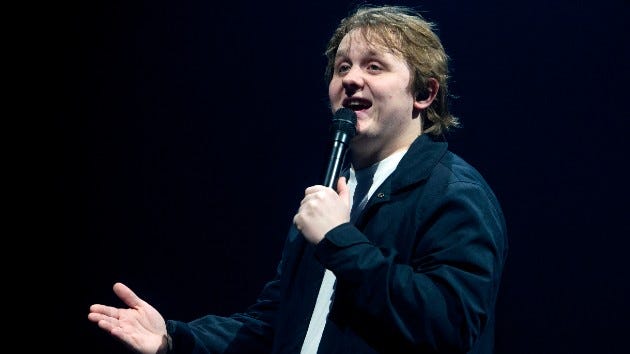 Lewis Capaldi's debut album Divinely Uninspired to a Hellish Extent was a huge success, featuring "Before You Go" and "Someone You Loved," was a huge success. He's currently working on the follow-up, but when asked how it's coming along, he predicts the ultimate sophomore slump.

"It's really bad. It's terrible!" he tells ABC News about his next album.  "The career...it's a tailspin from here on out!"

But seriously, the Scottish star reveals, "It's been very nice to kind of put it together and write with new people and stuff on this record..and yeah, it sounds good."

Lewis says he's personally surprised that he managed to get motivated to work on the album during the pandemic; he jokes that as soon as he heard about lockdown, he planned to do nothing but "laze about."  But instead, he buckled down.

"Don't get me wrong, I have lazed about... personally, I haven't made any strides at bettering myself," he laughs. "[But] professionally, [I'm] quite surprised at how much work I've got done!"

As for what we can expect from his new music, he says he has absolutely no plans to mess with a winning formula.

"I'm gonna do the same thing and it'll sound better because the record label are giving me more money to make it!" he laughs. "It's as simple as that!

"I like the music I'm making. And it feels pretty good, pretty exciting...we'll see how it goes," he continues.

But he won't let himself be too optimistic.

"It could be a massive flop!" he sighs. "And I'll be back working on the streets!"