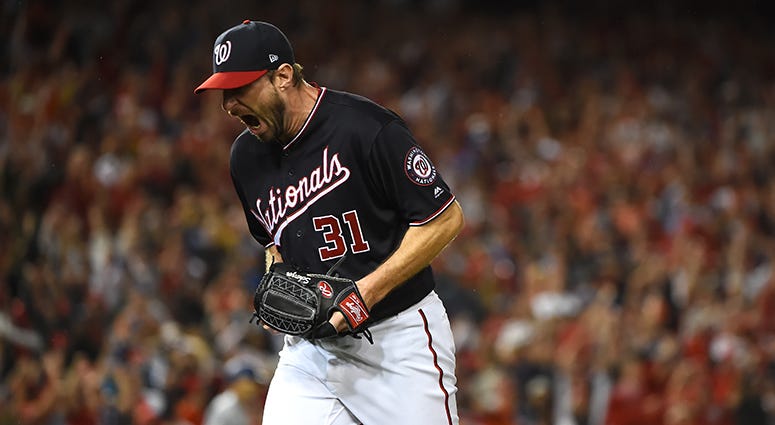 Photo credit Will Newton/Getty Images
By Chris Lingebach, 106.7 The Fan

The Nationals may get the small miracle they needed from Max Scherzer, who looked to reporters after throwing on the field in Houston Tuesday to say, "I'm good."

Scherzer was unexpectedly scratched from his Game 5 start in Washington on Sunday with spasms in his right trapezius muscle and neck. Joe Ross took the mound in his place, allowing four runs over five innings, a commendable effort given the last-minute circumstances, but still resulting in a 7-1 Nationals loss.

Things didn't look good on Monday either for a potential Scherzer return, but everything changed with Tuesday's throwing session before Game 6.

Didn’t even have to ask the question. Scherzer just gave the answer. And the answer is that the Nationals need to get to Game 7 because he’ll be ready to pitch it. https://t.co/JRPP8kHH8S

Four reporters looked at Max Scherzer while he walked through the dugout and he offered this without being asked. That’s damn good theater. https://t.co/KLkObcpcn7

The Astros lead the Nationals 3-2 in the World Series after sweeping them at home in Washington in Game 3-5.

The Nationals have Stephen Strasburg on the mound against Justin Verlander in the do-or-die Game 6 Tuesday night.