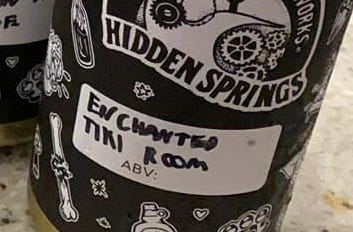 Michael, my husband, got be into craft beers when we first met, and it's been a thing for us since. They also add a good amount of lbs to your waistline, becuase they can be so tasty.

Not long ago I noticed that breweries around the country were coming out with exclusive beers. 'Disney' Beers so to speak. Basically , they take some of your favorite treats from the parks and try to recreate them in beer flavors.

While I was bored this weekend, I took a trip to Hidden Springs Ale Works in Tampa, and picked up the exclusive 'Enchanted Tiki Room' beer. It's supposed to taste exactly like you think it would. A Dole Whip! Now I'm not saying it didn't, but I mean, DUH it's beer. However, it did taste like a pineapple cider, with hints of vanilla and cream. Pretty delicious and refreshing on a hot summer day!

They were out of the original cans, but it was still on tap so I managed to get some in a bigger can.