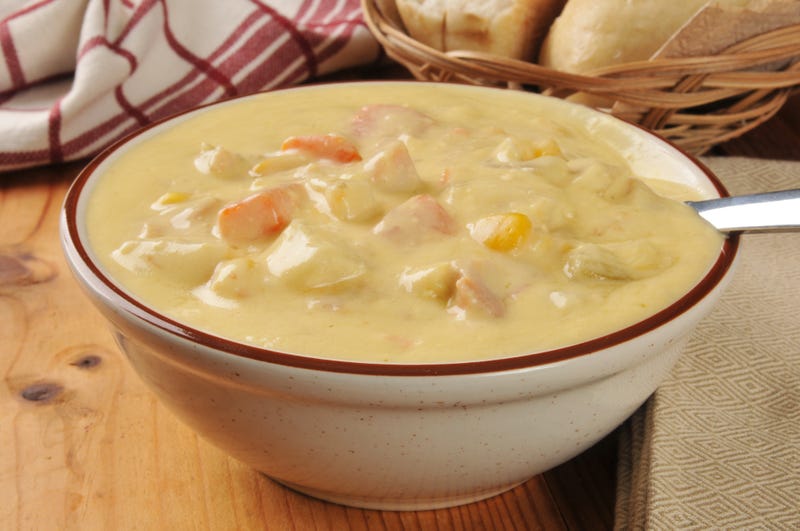 Every once in a while I get bored with some of my recipes. No that's a lie. I try new things ALL the time .... but last night was a bit different. I normally stick to soups I know how to make. Every now and then I'll make a chili when it's cold. Time to look in the pantry.

Well, I remembered the other day how I had some hot Chicken Corn Chowder at a local restaurant and thought, how hard can that be? I've never really made creamy soups before.... but when I found this recipe online, I was so excited that I already had everything in my pantry. Didn't hurt that I shopped extra for Thanksgiving.

I try to not use pork or bacon in any of my recipes. Mainly because my sister and her husband don't eat it. But I knew I could this time, and holy cow was it amazing. I had no idea how much of a flavor it could bring to a dish. But, if you don't like it... I'm sure you could just use some olive oil.

I love looking at recipes with the word 'EASY' in the title. This way I can tweak it in the long run if I perfect it the first time. I'll tell you this is one of the most delicious soups I have made myself. So if you're looking to warm up today , this recipe won't disappoint you and the family! You can see the recipe I used HERE, or just follow below!

First, you want to cut your bacon up. Throw it in a large pot, on medium heat and crisp. While it's cooking you can cut up and prep your onion, celery, chicken and potatoes. Once the bacon is crispy, remove it from the pot, but leave the grease in it. Saute the onions and celery til they are a bit clear, it will be about 5 minutes. Add the flour and mix it in well so it soaks well into the grease. Next, add the garlic and cook a minute or two until fragrant. Add the chicken stock slowly, making sure the flour is not clumpy and dissolves, it will start to thicken up. Add in the chicken, cream, potatoes, corn, Italian seasoning, cayenne pepper, and 3/4 of the bacon (per the recipe, they suggested maybe reserving some for garnish...as pretty as it looked, it didn't make a difference to me lol). Increase the heat to high and bring the soup to a boil. Once it's boiling, reduce the heat to a rapid simmer so it's gently boiling. Continue cooking until the potatoes are done. about 20 minutes or so. Then, salt and pepper to taste!

There's not many things I would tweak on the recipe, to be honest. However, I did think about adding some shredded cheddar cheese, I just don't want it to come out 'stringy' you know? OH, and I didn't have any chicken stock in my pantry, but I DID have bullion cubes and used 4, I boiled them in the water before pouring it in when needed. It worked perfectly as a substitute.

Hoping this recipe can save you and heat you up a bit today! - Susie