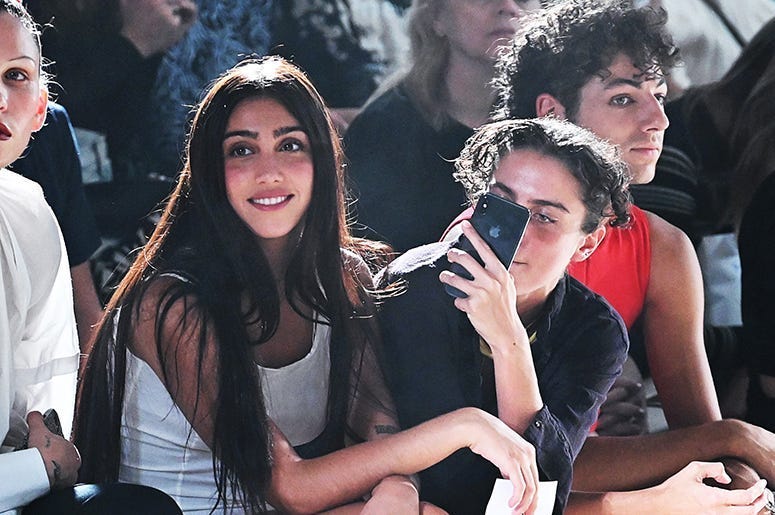 The iconic clothing brand Juicy Couture is making its comeback in the tail-end of 2020 and Madonna’s daughter Lourdes Leon has been tapped as one of its ambassadors.

In collaboration with Parade, Juicy launched a series of photos on Monday featuring new models, one of whom is Madge's daughter Lourdes, or Lola as she is also known.

Above, the "Material daughter" is seen on the street with her hands full, juggling a a flip phone and three purses while wearing two jackets, and zero pants. A second post, shows 24-year-old Lourdes rocking the iconic style and a fierce set of bedroom eyes.

In the image below, Lourdes is recognizable only by her tattoos, while showing off a silk scarf and giant ring.

Details and more photos of the limited edition box sets can be seen here.

"Once upon a time Parade and Juicy Couture set out to create the ultimate collection for nice girls that like stuff,” the brands said in a statement. "We were inspired by the revolutionary years of the early 2000s when tracksuits were softer, rises were lower, and there was bling on everything."

"Together, we designed a collection to celebrate the timelessness of brilliant and daring self-expression. A match made in heaven with thousands of sparkling crystals, glamorous jewel-tone shades, and a little bit of velour, Parade & Juicy Couture lived happily ever after."

Lourdes is Madonna's oldest child, whom she had with fitness trainer Carlos Leon in 1996 before their split seven months later. Madonna is also mother to Rocco, 20, David, 15, Mercy, 14, and eight-year-old twins Stella and Estere.