“Happy Days” is reuniting to show their support for the Democratic Party of Wisconsin.

Much of the cast of the '50s sitcom set in Milwaukee is planning to come together for a virtual reunion.

While fans can expect most of their favorite characters to make an appearance, former teen heartthrob Scott Baio, who played Chachi from 1974-1984, will not be joining.

However, Chachi may still make an appearance if “Full House” star John Stamos has his way. 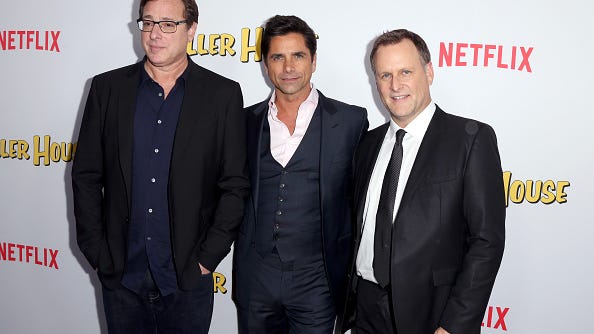 Stamos, who played the cool and beloved Uncle Jesse in the ‘90s sitcom, offered to step into the shoes of the iconic character.

He even got a decent approval rating on Twitter.

One user tweeted “I vote for this,” as another added “the ultimate upgrade.”

However, Baio didn’t support the idea.

Instead, he clapped back with a snarky response, writing, “Shouldn’t you be taking care of Aunt Becky?” The comment was in reference to Stamos’ co-star, Lori Loughlin, who was involved in the college admissions scandal.

Other Twitter users expressed disappointment in politics mingling with memories of the classic sitcom.

“This is so frustrating. First ‘The Princess Bride’ gets co-opted for a political purpose and now ‘Happy Days.’ I’m truly 100% fine with actors speaking their own minds, but I wish you’d leave our memories of shows we loved alone,” one user wrote.

The most important election of our lifetimes is right around the corner and Wisconsin is a must-win swing state. So, I’m thrilled to announce a #HappyDaysReunion to support @WisDems on Oct 25. Chip in any amount to attend - https://t.co/otVhvvojQZ

“We’re thrilled a show made famous in Milwaukee is coming back home to help make Donald Trump a one-term President,” said Ben Wikler, Chair of the Democratic Party of Wisconsin. “We know all roads to the White House go through the Badger State, and with the cast of ‘Happy Days’ helping us raise money to take back the White House, we believe even more we can deliver a victory on [Election Day].”

In addition to taking fan-questions, the cast will tell behind-the-scenes stories from the show and even include some surprises!