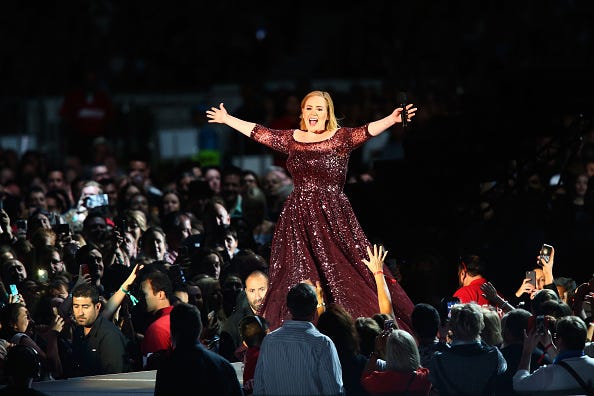 Adele made her debut as "Saturday Night Live" host, but fans were concerned that they would be without her impeccable singing abilities for the duration of the show. Luckily, that turned out to be untrue.

Adele began the show by addressing her drastic weight loss, noting that she knows she probably looks different since she was last seen in a public outing.

"And I know I look really really different since you last saw me, but actually, because of all the COVID restrictions and the travel bans, I had to travel light and only bring half of me - and this is the half that I chose," she said in jest.

Then, in a skit inspired by popular TV series "The Bachelor," Adele showed up as a contestant on the parody of the show. "You may know me from being the singer Adele," she began.

"I'm here because I've had a lot of heartbreak in my life, first at 19 and then sort of famously at 21 and even more famously at 25. But I have a really good feeling about Ben K. It's only night one, but I can already tell he's gonna be the next love of my life," she said.

It then becomes apparent that Adele, as a "Bachelor" contestant, is prone to breaking out in song. When the first impression rose is given to Hannah C., Adele begins to sing "Someone Like You."

Later in the skit, Adele can be seen singing other hits like "When We Were Young," "Hello," and "Rumour Has It."

"So I think night one's been an absolute smash, but I'm starting to get the feeling that I might be coming on a bit strong," she says.