Sara Bareilles had a big year in 2019. Her new album Amidst the Chaos earned her an appearance on “Saturday Night Live,” not to mention her eighth GRAMMY nomination. “Saint Honesty” is in the running for Best American Roots Performance at the 62nd annual awards this month.

The 40-year-old singer-songwriter has come a long way from her first awards show, when she admittedly might have gotten a little too excited, not that she’s apologizing. Bareilles recalled attending the ceremony with her mom and sitting behind future friend Jason Mraz and his mom. And then U2 opened the show. 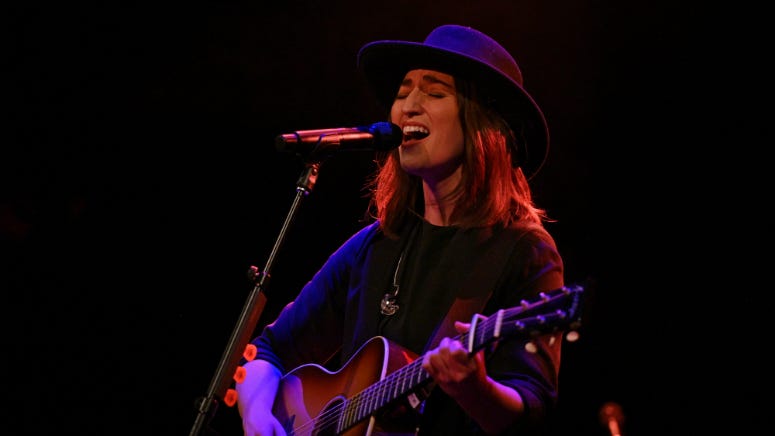 “I’ve never been to anything like that and I’ve never been sitting in the tenth row at a U2 concert, so I jumped to my feet because I was really excited. And I was the only person in the whole auditorium that was on their feet,” Bareilles recalled to RADIO.COM. “But I’m such a stubborn little a******; I’m not going to sit down because I’m feeling uncomfortable. I’m going to lean into this. I’m going to lean into being the only one standing, and I stood the entire time.”

Bareilles was rewarded for her enthusiasm, at least for a split second. She says Bono looked right at her at the end of U2’s performance and tossed her his trademark sunglasses. But that’s where the best part of the story ends.

“He tossed them right over my head and these two b****** behind me – I don’t remember who they are – but they kept the f****** sunglasses!” she lamented. “They were mine. They were 100% mine. They have bad karma because they should have given them back to me.”

The Jonas Brothers, Camila Cabello and Aerosmith are among the performers scheduled to take the stage at the 2020 GRAMMY Awards on January 26th. Perhaps some more sunglasses will come Sara Bareilles’ way this year – and maybe some hardware too.