The airline industry is taking face masks very seriously amid the coronavirus pandemic.

Many airlines had previous policies in place that required passengers and crew to wear protective face covering during a flight. A few exceptions were made for kids, passengers who are eating and drinking, and for anyone with medical conditions. 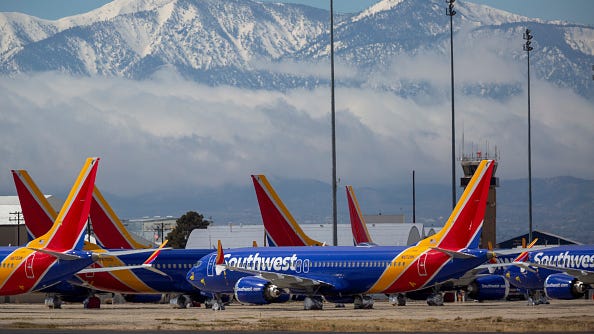 Southwest Airlines to Require Passengers Wear Masks, but Won’t Deny Boarding to Those Who Refuse

Dr. Michael Anderson told ABC that on his June 6 United flight to Denver, at least three passengers were allowed to board without a face mask.

"I was just very, very concerned. If the airlines want us to start flying again, want us to feel as though they're safe, well then how are they not enforcing the basics of a mask?” he said.

Tony Scott raised the issue of his seatmate not wearing a mask on an American Airlines flight to Texas with the flight crew who told him face masks are “optional.”

When Scott pointed to the policy which states otherwise, the crew said that children were exempt.

“She’s not a child, she’s a teen, and I would really prefer that she wear a mask,’” Scott explained.

ABC notes that 51-year-old Stephan Termaat had a similar experience on American Airlines flight from Miami to Dallas when he asked a flight attendant to intervene when he saw two men a few rows ahead of him not wearing masks.

The flight attendant said that despite the policy, they did not have the authority to force someone to wear a mask.

TSA Preparing to Check Passengers' Temperatures As Early As Next Week: Report

It’s up to each airline to determine consequences and rules, but many including American Airlines and Delta Air Lines are looking at "suspension of flying privileges on that airline" for those that do not adhere to rules.

Delta released their policy on Tuesday writing: "We take our mask requirement just as seriously. That's why customers are not allowed to board a Delta aircraft without wearing a mask and must follow crew member instructions to properly wear a mask in flight. Those who choose not to comply with this or other safety requirements risk future flight privileges with Delta."

In a release, United Airlines offered a different approach stating employees will be required to offer to provide a customer with a mask and stress their mask-wearing policy while providing them with an In-Flight Mask policy reminder card.

"If a customer continues to not comply, the flight attendant will file a report of the incident, which will initiate a formal review process,” the memo states adding that no action about a passengers future travel will take place on board.

Earlier today, New York hairstylist and actor, Brandon Straka took to Twitter to note that he was removed from his flight for not wearing a mask. “1st time this has happened. Not a federal law. @AmericanAir staff standing over me telling me it’s THE LAW. So much for “please respect those who can not wear a mask”. When I pointed out this wasn’t a law I was removed,” he wrote.

I was just removed from my flight for not wearing a mask. 1st time this has happened. Not a federal law. @AmericanAir staff standing over me telling me it’s THE LAW. So much for “please respect those who can not wear a mask”. When I pointed out this wasn’t a law I was removed.

Straka said the incident was filmed and that staff offered to rebook him under the condition that he wears a "mask on his next flight."

Entire episode is filmed. @AmericanAir
AFTER removing me flight manager says- they made a mistake. They had no right to ask you that.

American Airlines responded on Twitter saying they would like to “take a closer look at what happened.”