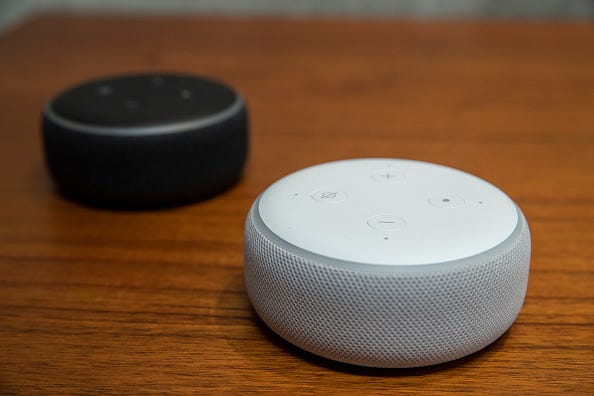 Photo credit Photo by Stephen Brashear/Getty Images
By US 101

Alexa is coming to your rescue this holiday season.

Amazon’s smart speakers have a new feature called “distraction technique,” which means the virtual assistant will intervene when things get a little heated during the holidays.

In short, Alexa will be on hand and ready to break up any arguments that break out over Christmas dinner if you say this simple phrase: “Alexa, change the subject”

Once you utter those 4 magical words, Alexa will obey and attempt to break the tensions and spark a new debate by asking questions like “Is Die Hard a Christmas movie?” or “what would your superpower be and why?”

Alexa is equipped with a variety of topic-changers in case they are necessary including: “Do you have a celebrity crush? Who is it? And why?” and “Pineapple on pizza was the greatest culinary development of the 20th century. Discuss…”

The idea came to the technology giant after research revealed that many family arguments tend to break out around 6:30 pm (in the U.K.) on Christmas day. You’d think everyone would be jolly and content after polishing off a holiday dinner, but that doesn’t seem to be the case.

Around 1,500 Britains were surveyed, which allowed Amazon to establish the leading cause of holiday squabbles.

According to Amazon, the biggest arguments revolve around money, what to watch on TV, bad behavior, or someone being a sore loser after a Christmas game.

Other reasons include bad gifts, relationships, television spoilers (rude!), and who has to clean up after Christmas dinner.

Even board game rules and family gossip trumped arguments over politics, which in this political climate is very surprising and encouraging.

As for who is most likely to be involved in the argument, Amazon narrowed it down to fights usually breaking out between siblings or with mom.

Don’t make Mom angry, you wouldn’t like her when she’s angry.