In an announcement that will surprise absolutely no one, Ed Sheeran has officially been crowned the U.K.'s most-played artist of last year. It's the fourth time in the past five years he's earned that title.

PPL, which licenses music for radio and TV in the U.K. and then distributes the royalties to the artists and other rights holders, announced the news when publishing its annual Most Played Charts. These charts show which artists and which songs were played the most on radio stations, TV channels, live music venues, bars, jukeboxes and stores across the U.K. 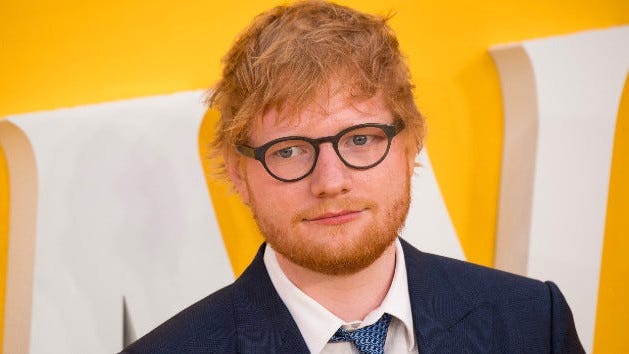 Ed's music was played the most, followed by superstar DJ and Taylor Swift ex Calvin Harris, and Sam Smith. Other artists that made the top 10 include Pink, Coldplay and Maroon 5.

But in terms of the most-played songs of 2019, the highest that Ed ranked was number four, with his Justin Bieber duet "I Don't Care." The top three spots were held down by a song called "Giant," by Calvin Harris and British singer Rag'N'Bone Man; "Nothing Breaks Like a Heart," by Mark Ronson and Miley Cyrus; and "Dancing with a Stranger," by Sam Smith and Normani.

Others on that list include "Walk Me Home" by Pink," the Kygo remix of Whitney Houston's "Higher Love," and "Someone You Loved," by Lewis Capaldi.