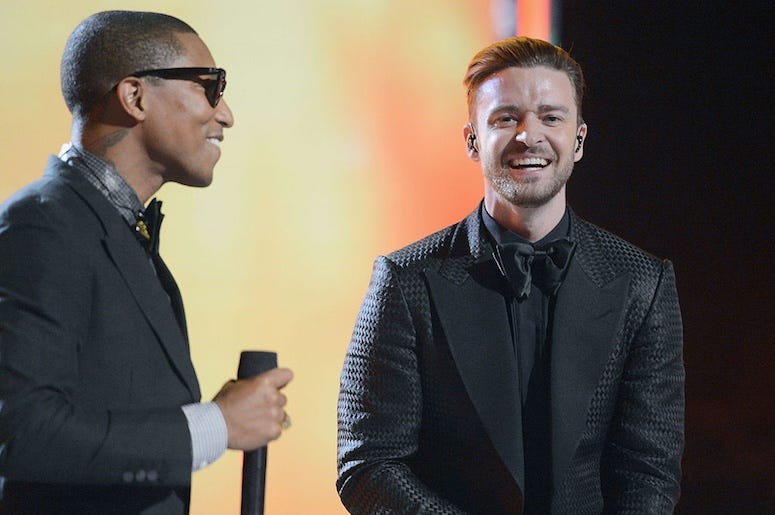 Imagine a Michael Jackson where the “King of Pop” added songs like “Rock Your Body,” “Cry Me a River,” and “Like I Love You” to his extensive list of hit singles in his career. According to Pharrell Williams, that was almost a reality.

Those three singles helped launch Justin Timberlake’s solo career and proved to be a successful transition from his previous boy band superstardom with *NSYNC. In a new interview with N.O.R.E. and DJ EFN on the Drink Champs podcast, Pharrell claimed that a majority of the songs on Timberlake’s debut solo record Justified were originally meant for Michael Jackson.

N.O.R.E. recalled a conversation he had with Pharrell at the time saying, "You hit me and said, 'Yo, I just sent Michael Jackson some beats!'"

"John McClain was his manager at the time,” Pharrell said. “We sent him pretty much all the stuff you guys are hearing on the first Justified album, that's all Michael stuff. All but one song, they were written for Michael.”

Pharrell did play an integral role in producing Justified as he was part of the production duo The Neptunes alongside Chad Hugo.

Funny enough, Hugo told MTV in a 2002 interview that Timberlake, Pharrell, and himself listened to Jackson’s hit records Off the Wall and Thriller for inspiration. "We listened to Off the Wall and Thriller a bunch of times to really get the feel of them and create something that's not a sample, but similar to those songs without recycling them," Hugo said at the time.