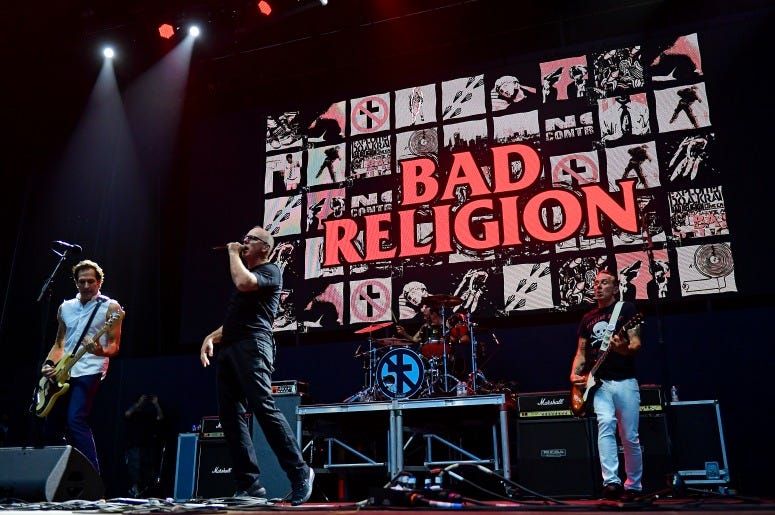 40 years after four kids from El Camino Real High School in California first took the stage, the band is back with a trek across the country to celebrate four decades of influence, origination, and questioning authority.

In celebration of the band’s 40th anniversary, Bad Religion has announced a North American tour, co-headlining with longtime friends Alkaline Trio. Kicking off in March in Los Angeles, the group has scheduled 18 stops across the US and Canada.

“This tour is extra special,” lead singer and band leader Greg Graffin says in a statement. “Not only are we celebrating our 40th anniversary, but we get to do it with Alkaline Trio, who are such a great band. Really excited about this.”

It’s an appreciation that’s echoed by Alkaline Trio’s guitarist Matt Skiba. “Bad Religion was one of my first loves,” he says “They are one of the very reasons I started playing punk rock music and continue to today. This tour is going to be epic on many levels. We’ve done Warped Tour and Festival shows many times over the years but this will be the first time it’s just us and I couldn’t be more thrilled.”

The very first Bad Religion show took place in November of 1980, with the band opening of Social Distortion at a warehouse party in California. “We only had about eight songs, and most of them were, like a minute long, so we probably played for about 15 minutes,” guitarist Brent Gurewitz previously told Spin.
“Society shunned punk because they didn’t think we had anything to offer. So from the earliest get-go, I was interested in writing songs that had some substance to them, not something just to slamdance to,” added Graffin.

You can find the full list of dates for Bad Religion and Alkaline Trio below.