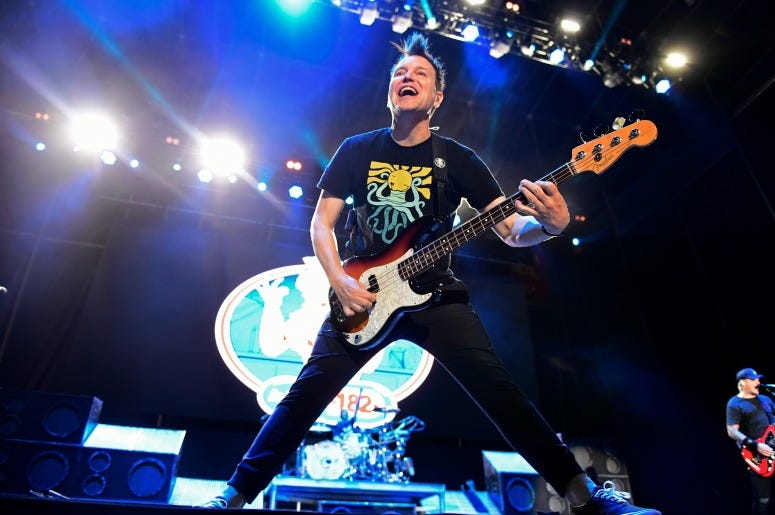 Hours before blink-182 put the wraps on their 20th anniversary tour, celebrating their breakthrough album, Enema Of The State, the band has unleashed their new album, NINE. The second effort as a new trio with Matt Skiba, it’s an adventurous new chapter in the story of the pop punk icons. Leaning deeper into their rock roots and expanding their sound in compelling new directions.

"I think we're taking everything that we've done in the past and building on it. Which is what we want to always be doing" Mark Hoppus told RADIO.COM earlier this year. "I think it's a good combination of fast punk rock stuff, modern production, and taking a lot of risks and experimentation."

NINE finds blink-182 willing to explore other sonic landscapes, marked by thicker grooves and heavier riffs, but also stepping into new arenas like jittery, industrial rock and atmospheric Hip Hop. It’s still unmistakably blink, with Hoppus’ ageless voice and Skiba’s rough and impassioned howl blending in the same style that made 2016’s California such a welcome return for the band.

The themes are similar here to that last album, which debuted at number one and landed a GRAMMY nomination. Loneliness, relationship strains, and a general overcoming of enduring obstacles are all part of the handbook, but on NINE the band approaches all with a greater level of maturity. Written with more well-earned authority, NINE reflects that some issues never go away, but we’re more equipped to handle them as we get older.

WATCH MORE: Blink-182 Clears Up The Controversy over the name 'NINE'