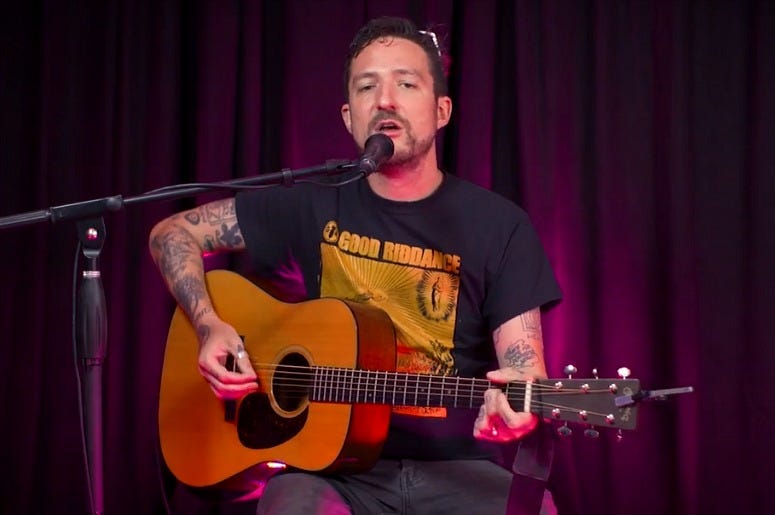 It seems like everyone has the pleasure of discovering Frank Turner at a different time. A musician’s musician, your favorite punk band’s favorite singer, Turner gets comparisons to some of the greatest folk artists of all time because of a sincere commitment to storytelling and emotional rock n’ roll.

The English singer always seems like he’s turning to something different, with a catalog that weaves from stadium-shaking stompers to intimate odes to loved ones and lost ideals. Through it all runs this thread, this heart that makes each song unmistakably a Frank Turner tune.

His latest effort is another turn, this time mining the pages of history to spotlight women who have paved their own lane and made a mark on the world, often instrumental in music. Turner joined us to play a few songs and share a few stories behind his new album, No Man’s Land.

“The first song I wrote for the record is about an area of London called Camden,” Turner explains, guitar resting on his lap as he talks about his old home. In a bar there, The World’s End, there’s a sign that tells the story of Jinny Bingham. “She was accused of being a witch, after quite a few of her husbands met sticky ends, should we say. So I wrote a song for her.”

Sister Rosetta Tharpe was a gospel singer who helped lay the blueprint for rock n’ roll, influencing Johnny Cash, Elvis Presley, Chuck Berry, and beyond. “She was a Pentecostal holy roller and she kind of took that speaking in tongues thing that they do and put it in her guitar playing,” Turner describes. “And in the process essentially invented rock n’ roll music.” Hear Turner explain how Tharpe got “written out of the script,” and watch him play “Sister Rosetta.”

From England to Arkansas to Egypt. Huda Sha'arawi was a feminist who overcame an oppressive environment to break through barriers in the Middle East. “I’ve had the fortune of playing it for her granddaughter,” Turner says of the song he penned for Sha'arawi. “That was pretty cool.”