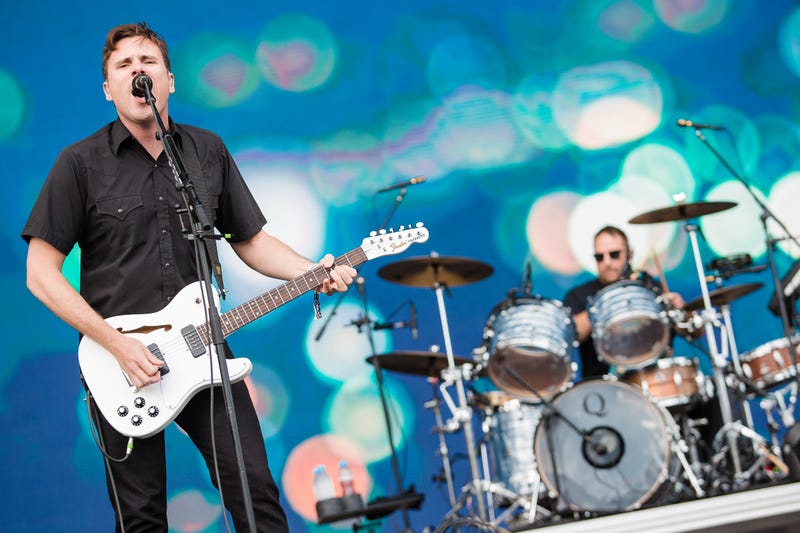 Jim Adkins of Jimmy Eat World sat down with RADIO.COM’S Kevan Kenney and filled us in on all the best stories the band has to offer. From sharing how Jimmy Eat World got their name to how they’ve maintained success as an ever-evolving band for over 20 years, to offering up details on playing Tom DeLonge’s wedding, Adkins reveals numerous wonderful tales.

Jimmy Eat World is in fact not named after Jim Adkins, that is all coincidence. The band’s name came from a crayon drawing that drummer, Zach Lind scribbled out when he was younger. The purpose of the drawing was to anger Zach’s brother, Jimmy, who often used to pick on Zach. Adkins explains that Zach drew his brother and says, “He drew this head with a globe in his mouth and wrote ‘Jimmy eat world,’ on it and put it on his door for him to see. Basically implying that he was so fat he’d eat the world if he could. For some reason, in high school, we thought we should make our band name that.”

With consistent evolution and the ability to maintain success for over 20 years, Kevan asks Adkins how the band has sustained themselves since high school. “It’s just about chasing the idea for the idea’s sake,” Jim tells us. “If we started making creative decisions based off of what we thought an imaginary listener might want to hear, then that dilutes what we’re doing and I think that real-life listener will hear that and nothing is more of a turn-off than someone trying to chase your approval.” Jimmy Eat World finds that their best moments come from being honest with themselves and creating in the mindset of what they’d want to hear as music fans themselves.

“If you’re trying to make a sequel of thing you just did, which was commercially successful, people think they might want that… but really want they want is what they’ve built on what you gave them for themselves and there’s no way you’re going to be able to give them that,” says Adkins. Often times fans connect experiences and moments of their life to the music at the moment in time in which they heard it for the first time. However, Jimmy Eat World’s stance is to keep fans moving forward and allow listeners to have new experiences in new moments with their ever-changing music.

From 1993 until now the way a band rises to fame has changed so drastically. As Jimmy Eat World has been unveiling their global live streaming Phoenix Sessions, with “Chapter V” set to debut on January 29th, Adkins says he can’t really put his finger on the perfect equation for the success behind a band. “Nobody has a formula, no really knows what they’re talking about when they tell you the day, but one thing that’s been true has been connecting with people in person,” shares Jim. He adds, “getting in front of people and performing is…. the Alamo of trying to raise your profile. If nothing else works you can do that.”

The band that has been able to assimilate and get along with everyone was also able to play at former blink-182 singer and guitarist Tom Delonge’s wedding back in 2001. Jim shares, “Tom’s fiancé at the time wanted us to perform at his wedding because we were one of his favorite bands and we were like ‘okay, this is not our normal gig, but it’s so weird that yeah ok.’” Jimmy Eat World’s appearance was a surprise for Tom at the time. DeLonge requested that the band play “Episode IV” from the band’s 1996 album Static Prevails.

Jimmy Eat World has tried to find new opportunities amidst the pandemic to give live performances. “What we try to do is think about the opportunity here. So what can’t you do? You can’t be in front of an audience… so where’s the opportunity in that?” ponders Adkins. As he continues he says, “it’s then throw out the idea that you have to be on stage, throw out the idea that you have to set up in a band versus crowd kind of like formation and think about what you can do that’s cool in the context of ‘what’s in frame right now?’”

The Arizona-based band’s next performance from their Phonenix Sessions series will take place on January 29th as a global streaming opportunity. Each chapter of the series features the band performing one of their full albums “on a whole new level.” Tickets are available on jimmyeatworldlive.com