It might be the most recognizable, authentic sweater in rock history: Kurt Cobain’s well-traveled, unwashed green cardigan worn during Nirvana’s iconic MTV Unplugged performance. And it’s going back up for sale.

Julien’s Auctions is once again the seller as part of its Icons & Idols event in New York and online later this month. Despite artifacts and memorabilia from the likes of Bob Dylan, Eric Clapton and Bruce Springsteen being included in the auction, Julien’s considers Cobain’s sweater to be the crown jewel, along with one of his guitars:

“At the center stage of this event will be two important items tied to the legacy and iconography of one of rock music’s most signature artists, Nirvana's Kurt Cobain, including his custom-built left-handed Fender Mustang guitar during Nirvana’s In Utero tour as well as his vintage olive-green cardigan worn at Nirvana’s most defining performance and one of rock history’s best live performances ever recorded, on MTV’s Unplugged in New York.” 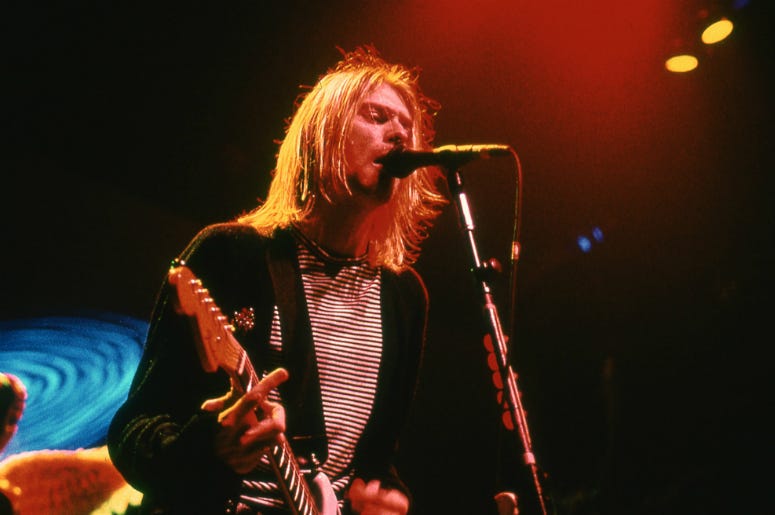 The sweater sold for $137,500 in 2015, and according to Rolling Stone, the current owner is a businessman who has kept it stored in acid-free tissue in a safe.
The starting bid this time is $200,000. Here’s the official description from the 2015 auction:

“The Manhattan brand sweater is a blend of acrylic, mohair and Lycra with five-button closure (one button absent), with two exterior pockets, a burn hole and discoloration near left pocket and discoloration on right pocket, size medium.”

Nirvana’s MTV Unplugged in New York was recorded in November, 1993 and aired a month later, but it wasn’t released on record until November, 1994 – seven months after Cobain’s death. The performance is remembered for its eerie funeral-like atmosphere and unconventional setlist that included several covers.