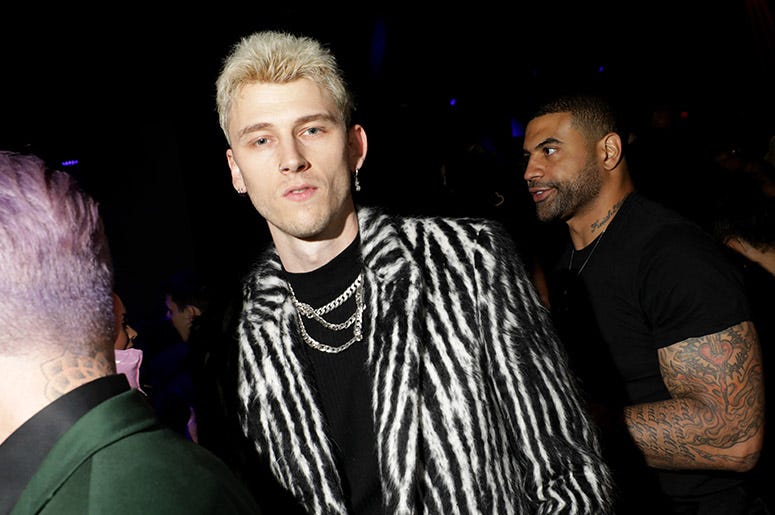 Machine Gun Kelly is laying bare his personal struggles with addiction, even admitting therapy, in a new and expansive interview.

In a new interview with Dave Franco for Interview, MGK revealed his early infatuation with drug use and how it expanded his mind. “I think I watched myself believe that drugs were how you attained a level, or unlocked something in your brain, and I’ve seen the pros and cons of it,” he revealed. “Adderall was a huge thing for me for a long time. And I went from orally taking it to then snorting it, and then it became something where I was scared to ever go into a studio if I didn’t have something.”

The artist attributes much of his repressed rebellion to a strict upbringing. “But I came from a father who was extremely religious and extremely strict, and wouldn’t even let me hold my pen the way I wanted to hold my pen,” he admits. “That made me rebel completely, and cut off communication completely, because I didn’t want to have any common ground with him.”

When asked by #DaveFranco how he wants to be remembered, @machinegunkelly responded immediately: “Uncontained, no box can be applied. Fearless.”

Below, the friends and former co-stars discuss Kelly’s new pop-punk album, “Tickets to My Downfall.” https://t.co/MLKLPUYvuI

This has been a massive year for Machine Gun Kelly, real name Colson Baker. His new punk rock persona elevated and exploded onto the scene with his latest album Tickets To My Downfall. The immediate success drove him to seek therapy, and better define this rock star identity. “I had my first therapy session last Thursday,” he told the publication.

“That’s the first time I ever went, ‘Hey, I need to separate these two people,’ which is Machine Gun Kelly and Colson Baker. The dichotomy is too intense for me.”

Another topic of interest is Kelly’s mentor relationship with Blink-182 drummer Travis Barker, who provided drums on his latest album. “Travis Barker has been huge in the process of grounding me, because he’s lived it,” the artist shared. “It’s much different than a priest or something, where I’m like, ‘How can you relate to me? It’s easy for you to tell me I can get through it when you’ve never faced these obstacles.’”

He also shared his love for girlfriend Megan Fox, and her emotional support during this turbulent year. "When you have a partner, mine being Megan [Fox], sitting there with you on those dark nights when you’re sweating and not being able to figure out why you’re so in your head, to help you get out of your head and put it in perspective, that really, really helps.”