Machine Gun Kelly is taking listeners deep inside his thoughts on his fourth studio LP Hotel Diablo. The first clue is the album cover. It’s an upside down childhood photo of the rapper with the top of his head opened up.

“I was drawn to this picture,” MGK told RADIO.COM. “Subconsciously, I realized that this album was me confronting a lot of my childhood problems, which I had never really acknowledged in the rest of my work.”

MGK was also looking to harness something more real on Hotel Diablo. He told us that he thought prior albums didn’t do as good a job as capturing the energy of his live shows.

“We kept trying to figure out what the missing connection was a between us and new potential fans, and we realized if everyone was falling in love after they saw us in concert than we should have the album just sound like the concert,” he explained.

Hotel Diablo also draws on MGK’s rock influences – from Avenged Sevenfold to Mötley Crüe. He played drummer Tommy Lee in the latter band's Netflix biopic The Dirt. MGK says the experience didn’t necessarily affect the sound of the new album as much as it influenced his attitude and ambition.

“Seeing that they just projected what they wanted to be out to the world and that they actually received that was a big inspiration for me,” MGK explained. “They were doing stadium shows in the club. They were like we’re going to be the stadium act; we’re going to make it to this point – even if we’re right here. People should feel like this shouldn’t even be inside this small wall, this should be bigger than life, and I think that is where I was this time. I was like I’m going to make my best album.” 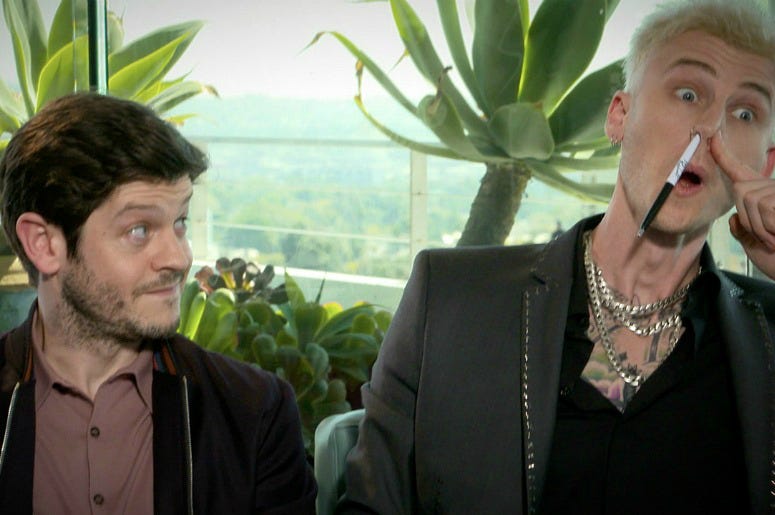 The album ends with the YUNGBLUD / Travis Barker collab “I Think I’m OKAY.” We asked MGK what his supergroup would be called in the rest of our interview in the video above.