NINE is slated to arrive on September 20, featuring 15 tracks of new music from the pop punk icons. The band’s first new album since 2016’s California comes packed with excitement and expectations, arriving as they celebrate the 20th anniversary of their album Enema Of The State and look ahead to new sonic adventures.

Along with their new song “Darkside”, last week was a wonderful one for blink fans. However, it was also a bit confusing.

As many people noted, NINE looks to be the eighth studio album from blink-182. Starting with their debut album, Cheshire Cat, when they were still just plain old blink, all the way up to Matt Skiba’s debut on California, the band technically has seven efforts in the books. But that’s not the way Mark Hoppus and Travis Barker see it.

Hoppus took to Reddit this weekend to clear up the confusion.

“NINE. This is our ninth album, as decided by me and Travis” he wrote. “Some count Buddha, some not. Some count the Mark, Tom and Travis show. Some count Greatest Hits. Some count Dogs Eating Dogs. I’m counting Buddha, Cheshire Cat, Dude Ranch, Enema Of The State, TOYPAJ, Untitled, Neighborhoods, California, and now NINE.” 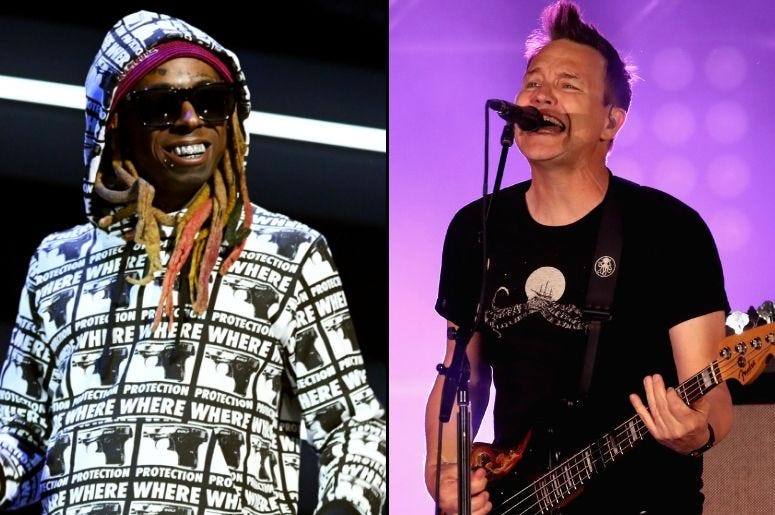 Lil Wayne Not Quitting Blink-182 Tour: 'I'm Having Too Much Fun With My Bros'

After the success of blink-182’s breakout album, Dude Ranch, their debut album Cheshire Cat was re-released along with their demo titled Buddha being made available for the first time. Both were originally recorded under the name Blink, before a lawsuit prompted the addition of the 182. In this case, it’s the demo that Hoppus considers on of the nine.

There you go. Facts.

Blink-182 is currently on tour with Lil Wayne, playing Enema Of The State in full for the 20th anniversary of the album. NINE arrives on September 20.