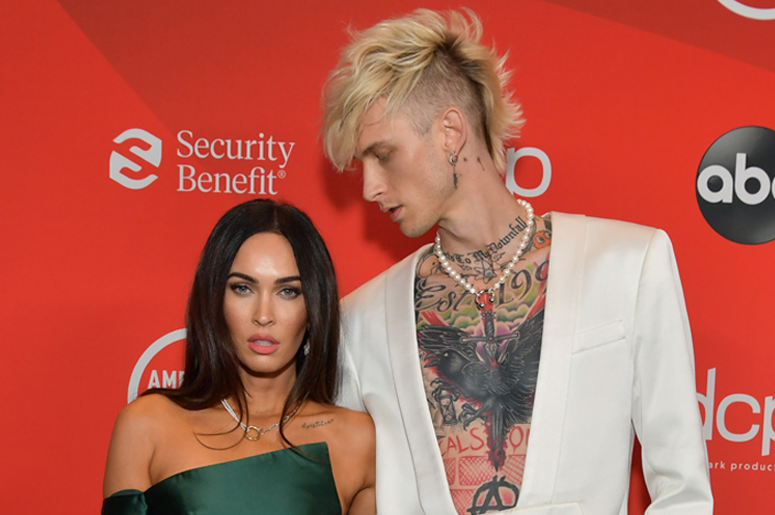 Megan Fox made her love for Machine Gun Kelly both red carpet official and permanent all in the same night. Walking their first red carpet together at the 2020 American Music Awards, Megan’s jewel-toned asymmetrical Azzi & Osta top revealed some new ink, that if you blink, you might just miss.

While most might have been distracted by the two basically joined at the hip, perceptive fans pointed out the elegantly scripted tat right below Megan’s collarbone that reads, “el pistolero,” which translates to the gunman, one of MGK’s many nicknames.

we finally have a close up of megan's tattoo and it says 'el pistolero' which is spanish for the gunman aka machine gun kelly!!! my fucking heart pic.twitter.com/BsFuY2lkuh

You would think Megan would have learned her lesson on getting tattoos for loved ones, as she has “Brian” tatted on her right hip bone in honor of her now estranged husband Brian Austin Green.

For what it's worth, it seems like MGK, has also inked his bod in honor of Megan, well at least according the lyrics of his recent song, “Banyan Tree (Interlude).” In it, MGK says “It was just four months ago that we were right here / And I met you / That’s not possible / Like you just got my initials tattooed on you / And I got your nickname tattooed on me.”

We have yet to see any picture proof of MGK's tattoo devoted to Megan. But I mean… even though he seems to be shirtless 50% of the time, locating his tat might be a little harder to do. Seriously, have you seen how many he already has?

Either way, we believe it. Since getting together this summer, Kelly and Fox have been seemingly inseparable and nothing but vocal about their undeniable connection. Megan has even referred to MGK as her “twin flame,” and recently told NYLON that “the intensity of merging with him is just overwhelming… but so beautiful,” and related loving him to “being in love with a tsunami or a forest fire.” Ugh still not over that. While Kelly credits Megan for making him a better person and taking him out of “the fast lane,” admitting this is the first time he’s truly been in love.