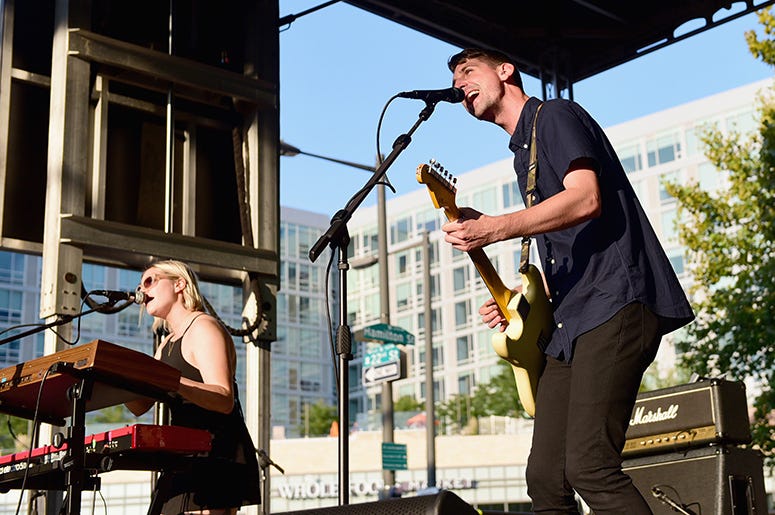 Dwight Schrute isn't the biggest deal to come out of Scranton, PA. That title is currently *checks watch* President-elect Joe Biden's. But coming up behind, or at least providing his walk-on soundtrack in this fictitious contest would have to be Tigers Jaw.

Songwriters Ben Walsh and Brianna Collins joined Emo Nite's Morgan Freed this week to talk about their new single "Hesitation" and upcoming album I Won't Care How You Remember Me, but mostly so Morgan could simply talk shop with his favorite band.

An item since 2005, Tigers Jaw will have six albums under their belt with their latest arriving four years after 2017's Spin. A conscious effort was put into creating a sound that reflects the direction the band has gone while playing on the road.

"The last record was super lush and layered," Ben tells Morgan. "This record being done as a four-piece band after touring for so long and playing so many shows, we wanted it to capture that sort of live energy. So, we tried to do as little layering as possible and just have it feel really organic."

The beginnings of the tracks were written pre-pandemic in late 2018 with the members able to come together to iron them out as a band throughout the following year.

"We would just get together for a couple of days every month or every couple of weeks and just put in the work to bring each song to where we wanted it to end up. We had the luxury of time for this record more than we have for previous records," says Ben.

As far as keeping busy under quarantine, Brianna tells Morgan she's been leaning more into her own art rather than music. "It's been nice... but yeah it has been hard to find inspiration. Sometimes though, if I listen to a song," she admits, "I'll get hit with wanting to make music or to listen to more music. But that's just weird times."

Brianna is excited to share the new record with fans, agreeing that the extra time the band had with the album brought about nuances that generally only come after touring extensively. "To me, it just sounds like the four of us. I can hear Teddy [Roberts] and Colin [Gorman] and their influence on the record. It feels very much like what Tigers Jaw is now with the four of us."

Listen to the full interview above. Tigers Jaw's new record I Won't Care How You Remember Me will be available on March 5, 2021 via Hopeless Records.