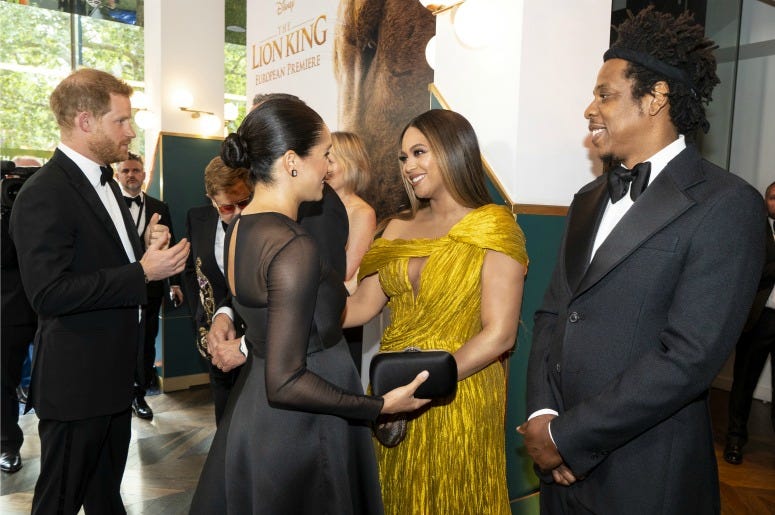 Power couples collided at the UK premiere for The Lion King this weekend, as Beyoncé and Jay-Z finally met Prince Harry and Meghan Markle on the gold carpet.

The “Spirit” singer plays Nala in the live-action edition of the film, but before the screening in London, Bey and her husband greeted the Royals with a hug and a quick conversation.

I’ve got a feeling this is what you might hVe been waiting to see 😉 pic.twitter.com/eICJgwlrJk

According to reports from People the foursome swapped parenting stories, with Jay-Z lending the new Mom and Dad a few tips. “The best advice I can give you, always find some time for yourself” Jay-Z offered up to Meghan and Harry.

The Carters also shared that their own 2-year-old twins did not make the trip to London for the premiere. “They are not here. They don’t come on every trip” Beyoncé explained. “We left them at home. They would loved to have been here.”

The meeting between The Carters and The Sussexes has been months in the making, with Bey and Jay appearing in front of a portrait of Markle while accepting their BRIT Award in February, and sharing a note of congratulations on her pregnancy.