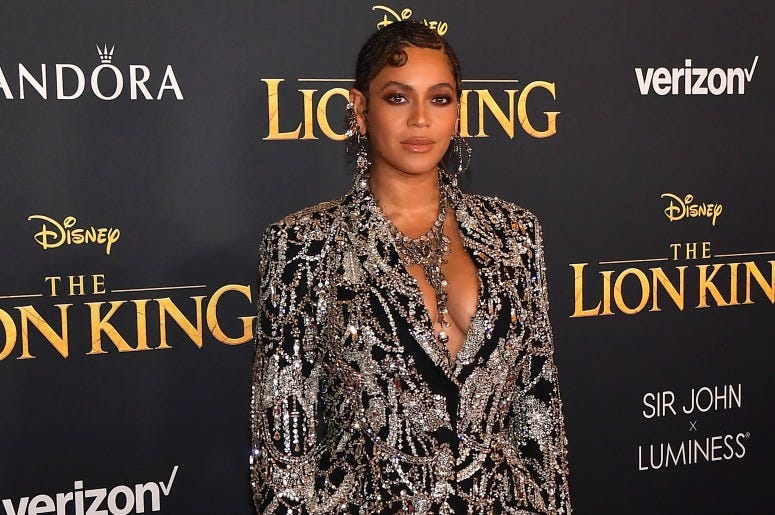 "This soundtrack is a love letter to Africa” Beyoncé explained to ABC News earlier this week about The Lion King: The Gift. “I wanted it to be authentic to what is beautiful about the music in Africa."

Today The Gift arrives, featuring 14 new songs executive produced by Bey and featuring the star’s wide network of talented friends and family. Throughout, the themes of the circle of life, the balance of nature, and weight of the king’s crown remain, all tethered to the film by working with artists and producers from Africa.

The African imprint is strong and moving across this new collection, most featuring Beyoncé at the center. It’s an impressive connection that never feels like a novelty, but is a pure influence and component of the LP’s DNA.

The album also serves as an update, or reimaging of some of The Lion King’s original songs and concepts. In place of the sweeping “Circle Of Life”, Beyoncé manages the message about the connection and the size of the world in the muted but powerful, “Bigger.”

The classic no-worry-anthem of “Hukuna Matata” trades in its Jonathan Taylor Thomas-like innocence for the swaggering, self-assured “MOOD 4 EVA.” A brush off to enemies and a toast to the good life, Beyoncé flexes with JAY-Z and Childish Gambino. “'Cause every day above ground is a blessing. I done leveled up now, view panoramic” she sings. “None of my fears can't go where I'm headed. Had to cut 'em loose, not lose, break the levy.”

Later after her husband rips through a luxury verse, Bey returns for a self-assured snap. “Why would you try me? Why would you bother? I am Beyoncé Giselle Knowles-Carter. I am the Nala, sister of Yoruba. Oshun, Queen Sheba, I am the mother” she snarls. “I be like soul food, I am a whole mood.”

“MOOD 4 EVA” is the biggest banger of the effort, but the best moment might be reserved for Blue Ivy Carter. The Carter’s first child stars and sings on “BROWN SKIN GIRL”, a tribute and celebration with an extra shot of sincerity from her inclusion.

The Lion King: The Gift also includes Kendrick Lamar, Pharrell Williams, Jessie Reyez, WizKid, and Major Lazor – but the leader of the pride is clearly Beyoncé. The soaring sentiment in the previously released “SPIRIT” and the tender and sparse beauty of “OTHERSIDE” are some of the most affecting additions to an already iconic catalog.

The Lion King: The Gift is now available everywhere, and The Lion King is in theaters now.