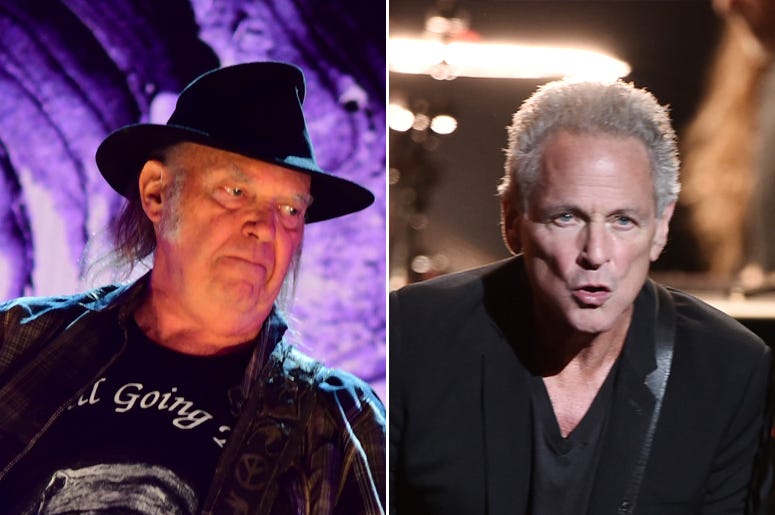 Classic rockers Neil Young and Lindsey Buckingham are the latest musical icons to sell off quite large chunks of their songwriting catalogs -- to the same company.

Young, who has released more than 70 albums solo and as a member of the bands Buffalo Springfield, Crazy Horse and Crosby, Stills, Nash & Young has let go of 50% of the copyright and income interest for about 1,180 songs he has recorded over the years. Buckingham went further, selling 100% of his catalog, including all of his Fleetwood Mac hits, plus 50% of his unreleased work.

So, who exactly is buying up all of this classic music? It's a British company called the Hipgnosis Songs Fund, founded by Merck Mercuriadis and musician Nile Rodgers in 2018. Other artists under their portfolio include Journey, Barry Manilow, Chrissie Hynde of The Pretenders, Blondie, and many more.

There will never be a “Burger Of Gold” but we will work together to make sure everyone gets to hear them on Neil’s terms. There’s a good chance their life will be changed just like mine was. [7/8]

In a statement announcing the Neil Young acquisition, Mercuriadis explained in a series of Tweets that he and his company have the utmost respect for the artist and promise there will never be a "Burger Of Gold" commercial that would make not only fans, but Neil himself, cringe in anguish.

I built Hipgnosis to be a company Neil would want to be a part of. We have a common integrity, ethos and passion born out of a belief in music and these important songs. [6/8]

As for Buckingham, the company says in a statement that he "is one of the greatest guitarists, songwriters and producers of all time yet is still so underrated."

Welcome to the Hipgnosis family @LBuckingham.

“It’s wonderful to welcome him and his iconic songs both as a solo artist and with Fleetwood Mac to the Hipgnosis family.” - @MMercuriadis

"His work with Fleetwood Mac has brought the world unparalleled joy over the last 45 years and he belongs in any discussion featuring Brian Wilson and Paul McCartney. It's wonderful to welcome him and his iconic songs both as a solo artist and with Fleetwood Mac to the Hipgnosis family."

It's worth noting that famed producer Jimmy Iovine (Tom Petty, Bruce Springsteen, U2, among others) has also let go of a large chunk of his production portfolio to Hipgnosis with the intention of using the proceeds to build a school.

"While barely in my teens I noticed that so many of my favourite albums had one name in common." - @MMercuriadis