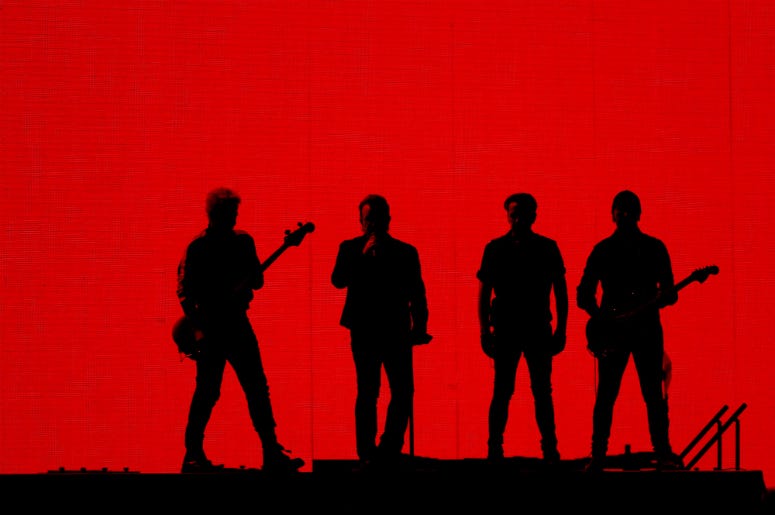 With dozens of wildfires burning across New South Wales, Australia, firefighters are flying in from across the continent to lend a hand. And a few of those brave souls got a sendoff to remember at the airport in Melbourne.

U2, always aware of what’s going on in the world, ran into dozens of firefighters and took a photo with them in front of the band’s tour jet. Bono, The Edge, Adam Clayton and Larry Mullen Jr. were grateful to be able to thank the firefighters in person.

“An honour to run into a couple of @cfavic heroes at Melbourne airport today,” they wrote on Twitter. “To all the firefighters working so hard across Australia – we salute you.”

An honour to run into a couple of @cfavic heroes at Melbourne airport today...
To all the firefighters working so hard across Australia - we salute you.
Bono, The Edge, Adam and Larry pic.twitter.com/LkPAycFI1n

Thick smoke from the fires has blanketed Sydney and surrounding areas, and most of the coastal areas of New South Wales are under very high fire danger. Hundreds of homes have been destroyed.

Melbourne was the second stop in Australia for U2, who will play in Sydney this weekend. The band also acknowledged the efforts of firefighters during the concert.

“Our prayer is for an epic night of rock'n'roll… where  we let go of some things and hold on tighter to others,” the band wrote on their website. “And that's what we got with the second show in Australia this evening, an epic night all the way from ‘Sunday Bloody Sunday’ to ‘One.’ 'Bad' once again a tribute to those fighting the country's fires and including a beautiful cameo of Nick Cave's 'Into My Arms.’”

U2’s The Joshua Tree tour will end with their first-ever trip to India. The 2019 segment of the tour is strictly an overseas event, with dates also coming up in Japan and the Philippines.