Tonight, live from Nashville the 2020 ACM Awards come to us with a celebration of Country music and performances from three iconic locations in Music City - The Grand Ole Opry House, the Ryman Auditorium, and the famed Bluebird Cafe.

Rising star Caylee Hammack was one of the early winners this year, scooping up the Music Event of the Year award for "Fooled Around and Fell In Love" alongside Miranda Lambert, Maren Morris, Ashley McBryde, Tenille Townes, and Elle King. The reinvented Elvin Bishop song was recorded by Lambert in 2019 ahead of her Roadside Bars & Pink Guitars tour, which featured each of the collaborators.

Speaking with RADIO.COM's Katie Neal via video chat backstage at the ACMs, Caylee was thrilled to be a part of this year's virtual festivities and even more excited to be able to share a win with some of her best friends.

"Every time I hear the song I scream," she says with a smile ear-to-ear. "I don't know how you're supposed to feel except elated, ecstatic... any E word that has a positive synonym, I'm just all of it. I feel electrified through this. It's been such a blessing."

This is her first time winning an award with a list of collaborators, so naturally she had questions about the physical trophy and whether or not there was one to share, or if everyone got their own. That's when she hopped on the group text with all of the women to ask.

While looking around her home thinking about the best placement, she asked, "'hey, do we all get a trophy or is it just one we pass... I need to know.'" After they explained that everyone gets to take one home, Caylee realized, "that means I'm gonna have to get a shelf!"

But wait, we need to hear more about this superwomen of Country group text. It can't be all about interior design.

"These women... I mean, it's amazing to win an award but it is even more amazing that I've gotten to develop friendships with these women. Tenille Townes and Ashley McBryde are two of my closest friends and getting to celebrate every little thing that happens to any of us, it is beautiful, man!

"As an artist it can be very isolating, you can feel very alone in this world and just having these women, it's amazing. Miranda has been so good to us, she's really good at getting us together and connecting people. Tenille is just sweet as sugar; Ashley is hilarious when you get her drunk! I've got good people that I have been surrounded with, mostly all women. Which I didn't even realize until someone brought it up."

Caylee's 2020 debut album If It Wasn't For You features her best friends Ashley and Tenille on the track "Mean Something," as well as the iconic Reba McEntire on "Redhead."

"It was really just a manifestation situation," Caylee says of Reba's inclusion. When thinking of features for the record, she knew Ashley and Tenille would be perfect for "Mean Something," and just threw a big wish out there about getting Reba. After some back room plays between managers, Reba's team emailed saying she was in.

"She agreed to sing a bunch of the song and come in the studio with me. She is so sweet, but also this boss. She is everything as a woman I want to be. Such a strong business woman that you know not to mess with her. But also she's so warm and lighthearted that you know you can joke around with her and she'll give it right back to you. She's perfect!"

I am SO proud of these women for all of their singular accomplishments..then i got to sing a song with all of them. That was already an honor. Then we fooled around & won an @acmawards 🤪 Thank you @mirandalambert for having me on tour and on this song, what a moment. 🧡

Here's a look at all of the winners so far. Follow along with RADIO.COM to see who walks away with the night's biggest awards. 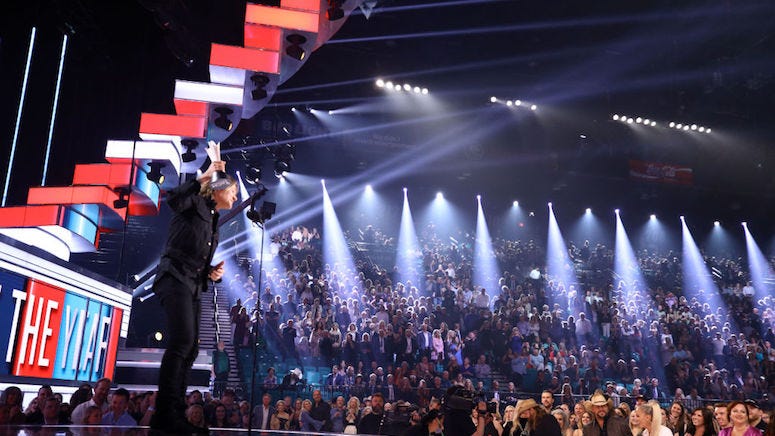