This Sunday October 27, our five friends from Old Dominion will be taking over at 6PM local time on all RADIO.COM Country stations, playing back their new self-titled album in full and offering some insight into the project. Be sure to tune in for an inside look into a special album from the band. 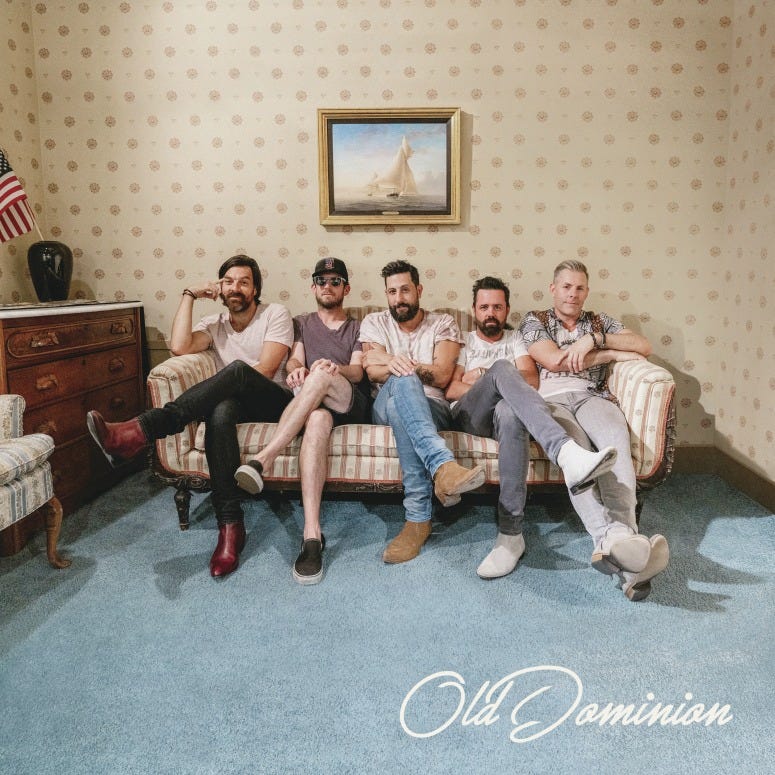 There were lots of funny titles the guys in Old Dominion joked about for their third studio album, but in the end it felt right for it to be self-titled.

“When it came down to it, I don’t know, it just kind of felt like the right time to make a switch,” Brad Tursi explains in the RADIO.COM exclusive interview above, as the group relaxes together, taking up the length of the wrap-around couch. “We’re very proud of this album. Just kind of put our name on it and that’s it.”

“We’ve said this before but, I think with this album we kind of feel like it sounds the most like a band,” adds Trevor Rosen. “Not just a collection of songs but it sounds like five guys that play music every day for years and years together, intentionally made this record. So it sounded the most like us of any of the albums so far, so it felt like a good time to self-title it.”

The group is right to be proud, as the just released LP showcases the best parts of the all their previous efforts, blended to perfection with a willingness to take their music to the next level. They walk a little taller this time around, and it is because of the earned confidence that a solid set of songs provides.

“There’s so many lyrics that I’m proud of on this album,” Matthew Ramsey explains, digging to find his absolute favorite. “One that comes to mind, it’s not a super-profound lyric, but it is in ‘Paint the Grass Green.’ It says, ‘they say if you love someone don’t hold them back. I can’t quite convince myself I am cool with that.’"

"It just seems like such a conversational line and such a real moment that, those are always my favorite where it just feels so real.”

Without pause, Brad jumps in to recite his own favorite line from “My Heart Is a Bar.”

“I’ve come to the conclusion that true love is an illusion,” he recites. “You’re either used or you’re usin’ someone else.”

“Ahh, that was gonna be mine,” Geoff Sprung adds, as the group laughs. “Sometimes I don’t like to hear that line,” Brad grimaces.

Being a great group of songwriters, the crew in Old Dominion have pitched songs to other artists, including tourmate Kenny Chesney. “We did try to pitch ‘Song For Another Time’ to Kenny Chesney,” Ramsey remembers. “He said, ‘that’s a great song. You should do it,’” she recalls as they all laugh.

Luke Bryan hasn’t done an Old Dominion song yet, but he has been a part of one on a dare. While rehearsing for the ACM Awards, Bryan walked by the band and they added his name to the lyrics of “No Such Thing as a Broken Heart.”

“It went completely under the radar,” he smiles. “No one ever even noticed.”

You can hear more stories and songs from Old Dominion this Sunday October 27 at 6PM local time on your favorite RADIO.COM Country station. Old Dominion is now available everywhere.