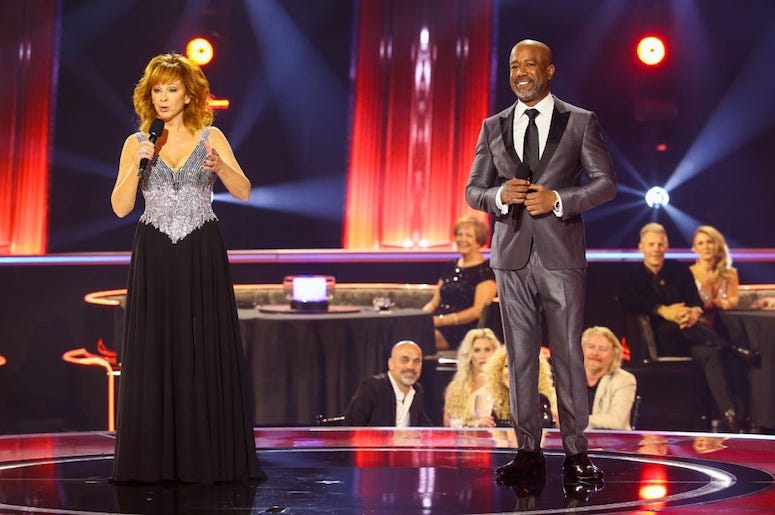 The 2020 CMAs were everything we expected and then some.

It was a magical night in Nashville, TN as the biggest stars in Country music gathered at the Music City Center to celebrate their achievements. Hosted by Country icons Reba McEntire and Darius Rucker, the CMAs featured memorable performances and tributes to Country legends.

Plus, the 2020 CMA Awards featured a Red Carpet with Country stars showing off their immaculate outfits and it was as great as you would have imagined.

From beautiful performances to tear jerking acceptance speeches of the night’s big winners, here are the 13 best moments you missed at the 2020 CMAs. 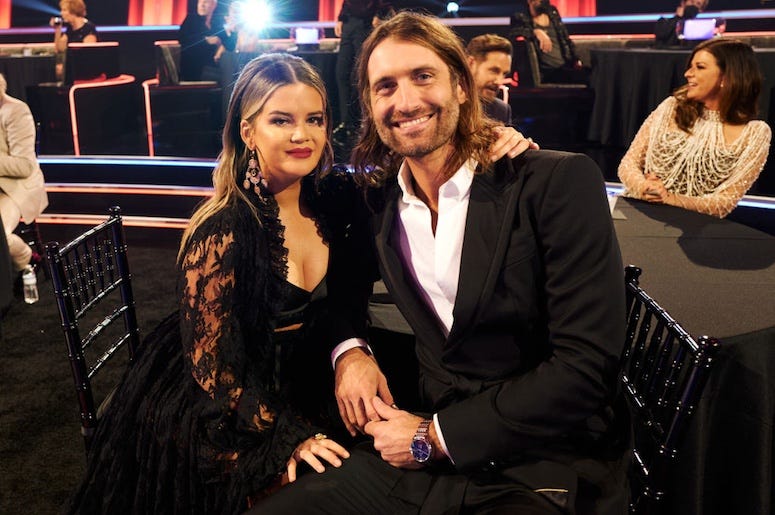 An actual award show with an audience, a live audience

Normally this wouldn’t be anything of note, but this year has been anything but normal. The socially-distant crowd was set up in lounge style seating in between two stages at Music City Center. From loud applause to “wooooo” in the middle of a fiery guitar solo, it was odd, yet comforting to hear a live audience once again. While time will tell whether or not this was a good idea, it marked one of the very first award shows to have a live audience since the beginning of the pandemic.

Talk about one heck of an introduction. We were promised one fiery tribute to the late Charlie Daniels and this fantastic group of Country stars didn’t disappoint. Dierks Bentley opened up the medley with a solo rendition of “Long Haired Country Boy.” Brothers Osborne turned it up to 11 with their cover of “Trudy” and then Ashley McBryde stepped out on stage to join the Brothers for an incredible cover of “Texas.” Finally, Jason Aldean brought down the house with a foot-stompin’ rendition of “Devil Went Down to Georgia.”

Reba and Darius Rucker get the party started

Reba and Darius Rucker were just as impressed at the fact there was a live audience as we were. While they discussed how refreshing it was to be in front of an audience again, you could feel their happiness and excitement emanating through your TV screen.

Gabby Barrett and Charlie Puth mesmerize the crowd with 'I Hope'

In a night filled with crossovers, Gabby Barrett brought the first one to the stage as Charlie Puth joined her for a gorgeous performance of “I Hope.” Both have majestic voices and they were on full display at the CMAs. Despite previously voicing her concerns about her pregnancy impacting her ability to breath well, Barrett did an incredible job showing off her incredible voice.

Ashley McBryde gave a gorgeous performance of her song “One Night Standards” that was pure poetry. The song itself is about a woman setting the ground rules for a one-night stand, but McBryde shows off her ability to paint a crystal clear picture and tell a story through song with this performance.

They may have been the only ones at the massive Hollywood Bowl in Los Angeles, but Dan + Shay and Justin Bieber delivered a titanic performance of “10,000 Hours.” The occasion marked Bieber’s CMAs debut and he introduced himself with a bang as his voice beautifully accompanied Dan + Shay on their hit collaboration. Earlier this week, Dan + Shay took us inside the preparations for the performance and how they were feeling leading up to it.

What a beautiful #CMAawards tribute to the late Mac Davis. Thank you for this moving performance, @Reba and @DariusRucker 💕 pic.twitter.com/KjobR4E78Q

Although the song was recorded and made popular by Elvis Presley, “In The Ghetto” was written by Mac Davis, who passed away in September. Reba and Darius both have amazing voices on their own, but to hear them together was magical. It was a fitting tribute sung by two great Country music voices.

An absolute legend! Seeing @JimmieAllen singing with Charley Pride before presenting him with the lifetime achievement award is so special. ❤️ #CMAawards pic.twitter.com/wJB1nzsfKQ

First thing’s first, Jimmie Allen rocked a DAPPER tuxedo that puts him in contention for best-dressed at the 2020 CMA Awards. In the middle of his performance of “Best Shot,” Allen halted the performance to pay tribute to Country legend Charley Pride. Pride then joined Allen on stage for an incredible version of Pride’s song “Kiss an Angel Good Morning.” After the performance, Allen presented Pride with the Willie Nelson Lifetime Achievement Award.

😮 Brb. Picking our jaw off the ground from how mesmerized we were of this @ChrisStapleton #CMAawards performance. pic.twitter.com/okzB5lJW9E

Grab a tissue, Chris and Morgane Stapleton make us cry

Chris and Morgane Stapleton gave one of the most beautiful performances of the evening as the husband and wife duo played an emotional version of their song “Starting Over.” Totally still, totally present, the duo proved all you need is an acoustic guitar, two beautiful voices, and a song to capture the attention of millions.

Ingrid Andress sheds a tear during emotional debut at the CMAs

If you think being a part of these award shows doesn’t mean much to artists, think again. An emotional song combined with an emotional experience hit home for Ingrid Andress as her debut performance at the CMAs is one she’ll always remember. We’re glad she’s here and excited to see what the future has in store for her.

After taking home Single and Song of the Year Awards, Maren Morris shows why 'The Bones' is a hit

Maren Morris’ performance of her award winning song “The Bones” will certainly go down as one of the best of the evening. Showcasing her incredible voice, the performance was one that would send shivers down your spine. Plus, her bassist had a keyboard attached to her bass. How cool is that?!?!?

‘You’ve made this genre so, so beautiful’ - Maren Morris shouts out Black female Country artists

“There’s some names in my mind that I want to give recognition to because I’m a fan of their music and they are as Country as they gets,” Maren Morris said in her acceptance speech after taking home the Female Vocalist of the Year Award. “Linda Martell, Yola,
Mickey Guyton, Rissi Palmer, Brittney Spencer, Rhiannon Giddens, there are so many amazing Black women that have pioneered and have continued to pioneer this genre,” she said. “You’ve made this genre so, so beautiful. I hope you know that we see you. Thank you for making me feel so inspired as a singer in this genre.”

And last but certainly not least, your 2020 #CMAawards Entertainer of the Year is...@EricChurch! This is his first time winning in this category and we couldn't be more thrilled for him! Congrats to all of tonight's nominees and winners!👏🏆 pic.twitter.com/BFd9gopD0N

The long wait is over, Eric Church finally took home the coveted Entertainer of the Year Award. During his acceptance speech, Church used the opportunity to speak about the healing power of music. “The win is we are all were here tonight together as Country music, in person, live, not on Zoom," he said. “Politicians are about division, music is about unity,” he added.

sports
What Patrick Mahomes told Mecole Hardman after muffed punt
news
Joe Biden's press secretary reveals his favorite ice cream flavor
sports
Players Association rejects MLB’s proposal for universal DH, expanded playoffs
news
Frontier Airlines passenger told he should be on no-fly list after complaining about a sick passenger
sports
Deion Sanders didn't show up to draft meetings with Lions because he didn't want to go to Detroit
sports
Patrick Mahomes on idea he is chasing Tom Brady: 'It's going to be hard to do'