There ain't no party like a Jon Pardi, and this week Rob + Holly welcomed the man himself to the Friday Night Takeover on RADIO.COM Country stations nationwide to help you kick off the weekend!

Jon's been keeping himself quite busy during the music industry's prolonged pause during the pandemic releasing a brand new "Deluxe" edition of his ACM nominated, now certified-platinum album Heartache Medication at the beginning of the month. He's celebrating the one year anniversary of the original release and his first back-to-back headlining shows at the famed Ryman Auditorium in October 2019.

Pardi's also been at the forefront of artists to embrace the drive-in model of live shows, while at the same time keeping fans entertained at home, premiering his "Pardi Time" web series with CMT, and challenging his contemporaries Kane Brown and Tim McGraw to "get ripped" during quarantine.

Spending so much time at home can have positive and negative effects on a relationship. One listener wanted to know what Jon's advice would be to keep couples who are constantly together from "killing each other" while under quarantine.

After giving it some thought, and with a completely straight face, Jon simply says, "hotel sex." It seems Jon's advice would be to get out of the house and have a good ol' time with each other. "You still got hotels... you don't have to see anybody. Get out of the house, and get down!"

Jon was also set to tie the knot with his fiancé Summer Duncan back in May, but due to the spread of COVID-19 he and fiancé decided to postpone their nuptials until later this month.

"It was gonna be this big, extravagant 300 person wedding," Jon explains about the guest list, which has since been cut to about 75 people. "It's a lot more peace of mind just because of COVID-19 and everybody flying in from everywhere," he says. "It's a big ol' barn and everybody can space out and do the whole social distancing -- you know, 'til they get wasted."

"We're trying, you know. It's a tough year to do anything but I think this is gonna work out great... and she's gonna be beautiful, so that's all that matters." 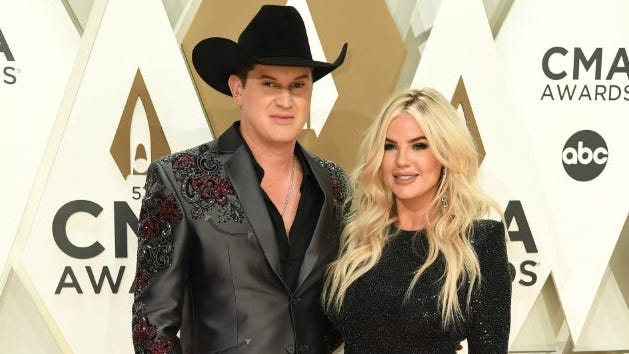 Finally, looking forward to the couple's cocktail hour, and back at touring life, Jon tells us the weirdest food he's ever eaten. Rather than being specific, he took a little dig at his buddy and fellow Country singer, Dierks Bentley.

"Everything on Dierks Bentley's tour catering," Jon says without missing a beat, as if he's been thinking about this very question for quite some time. "All those guys eat are beans and rice. All the vegan stuff was actually really good, but it's got the texture. It's a lot of tofu, and that's good, but it's just a little weird."

"I mean, I'll eat anything if it fills me up. But damn, they just eat beans and rice. 'It's grown organically,'" Jon says laughing, mimicking Bentley whose band and himself have taken on more healthy eating habits. "Him and his band got into the vegan stuff but he goes in and out. I don't know where he's at now. He could be back on the meat train, I don't know. Or he's on the beans and rice train."

"They like it because it kept them so skinny, they didn't have to work out."

We think it's safe to say there will be no quinoa salad on the wedding menu come November 22.

The deluxe edition of Jon Pardi's Heartache Medication is out now. Watch the full interview above and stay tuned for more with Rob + Holly on your favorite RADIO.COM Country stations.