It’s time to pay up, and for Luke Combs, it means eating less.

The “Beer Never Broke My Heart” singer is going vegan for three months. That means no cheeseburgers, deer steaks or even butter. It’s not by choice; it’s because of a football game.

Combs bet his keyboard player, Neil Tankersley, that his home state Carolina Panthers would beat Neil’s hometown Atlanta Falcons and lost. Tankersley, who is balding, would have had to grow out what little hair he has for three months, while not wearing a hat on stage if he lost. But it’s Combs who is making the major lifestyle change, at least temporarily. 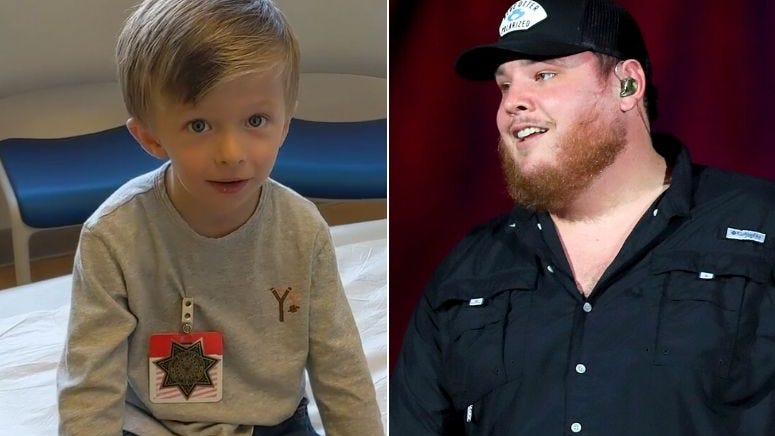 "I’m still alive. I’ll put it that way," he joked to ABC News. "I eat a lot of bars, protein bars, lot of veggies. And, if you’re not familiar with vegan, it’s no animal products whatsoever; no meat, no cheese, no milk, no butter, no anything good."

By the sound of it, Combs has no intention of doing the vegan thing any longer than he has to.

"I’ve still got about 70 or 80 odd days left, which is pretty depressing to think about. But I will prevail through the end of this!” he promised. “But I’m looking forward to a good deer steak after this is all said and done."

Combs’ willpower is even more impressive considering he’s spending a lot of time on the road. He just extended his What You See Is What You Get tour into the fall. The new leg begins September 19th in Raleigh and runs through December 4th in Boston. Dates had already been scheduled this spring, but the new leg will debut an in-the-round stage design.

Combs is also booked for a separate set of North American shows between March 31st and July 18th, and two stadium concerts with Tim McGraw in early September. Get more details about Luke Combs tickets here.

Adding more dates to the WYSIWYG Tour! Wanted more of y’all to have an opportunity to come, so we’re putting the stage in the middle of the floor to open up all of the seats in each venue! Join/login to my fan club at https://t.co/RzSYEvromx to receive pre-sale registration info. pic.twitter.com/xieO0mQ9ld

*with Ashley McBryde and Drew Parker

†with Ashley McBryde and Ray Fulcher