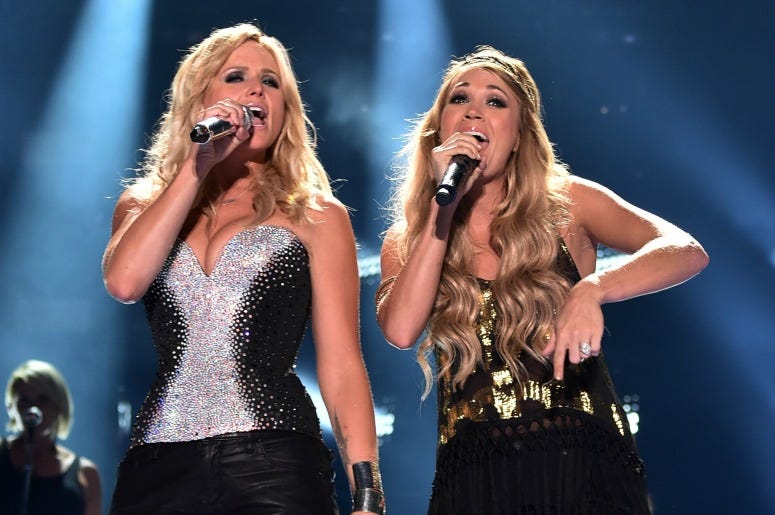 This year’s CMA Awards are a celebration of the legendary women of Country music. That’s why Carrie Underwood will be joined by Reba McEntire and Dolly Parton as hosts, and why the spotlight burns a little brighter this year for the Entertainer Of The Year category. It’s been 8 years since a woman has taken home the top prize of the night, and there is no time like now to break the streak.

Just ask Miranda Lambert, she takes the CMAs seriously and offered up a full breakdown of why Carrie Underwood should win Entertainer Of The Year for the first time. “It’s fall weather in Nashville,” she wrote on Instagram. “Sitting here on my porch, I realize with the chill in the air that it’s getting closer to November, which means my birthday month and CMA Awards final voting time.”

WATCH MORE: From Veganism to Horror Movies - Facts You May Not Know About Carrie Underwood

Lambert went on to share her “two cents” on some of the nominees. She called Keith Urban, “a friend and a hero of mine,” saying that, “he believed in me when I was a baby artist and I will be forever grateful.” As for Garth Brooks, he was her first cassette and first concert and “it was life changing.”

Eric Church is “one of the best songwriters of all time in my opinion. He turns a phrase like no other,” according to Miranda. And Chris Stapleton has “the kind of voice and songwriting that makes you want to quit, and work harder. A sound that can’t be beat. Period.”

Those are some pretty big words for four amazing men, but she saved her biggest praise for Carrie Underwood, who is nominated for Entertainer Of The Year for the second time.

“She put out her first single in 2005 and from then on country music was changed for good,” Lambert gushed, after recounting the rigors of an all-female tour like Underwood’s Cry Pretty 360 Tour. “That iconic voice has been classin’ up our stages, charts and televisions for a decade and a half. The Voice. The legs. The songs. The brand. The mom. The wife. The Okie. The Jesus lover. The blonde bombshell that is Carrie. She blows me away every time I hear her sing. She never wavers in who she is or what she stands for. She has stayed true and pushed herself to be better.”

“I have her back in this picture and I’ll always have her back. So for the sake of sequins, spanx and spray tans, take it home! You Carrie the torch!”

We’ll find out who wins for sure when The 2019 CMA Awards happen live on Wednesday November 13 at 8 PM ET on ABC.