Before you go and tattle on us to the CMAs or accuse us of witchcraft, we are willing to let you in on our little secret. You have one of those trusting faces, so allow us to share what we’ve learned.

It all starts with our Magic 8-Ball. Regarded for centuries as the ultimate predictor of fates, shaken by the world’s greatest leaders, gifted to us at an office holiday party with a $5 spending limit – the Magic 8-Ball knows all. Backstage at the 2019 CMA Awards, we harnessed its pure liquid power to tell us what to expect from the show, passing it to our favorite artists to get the answers we all need to know. 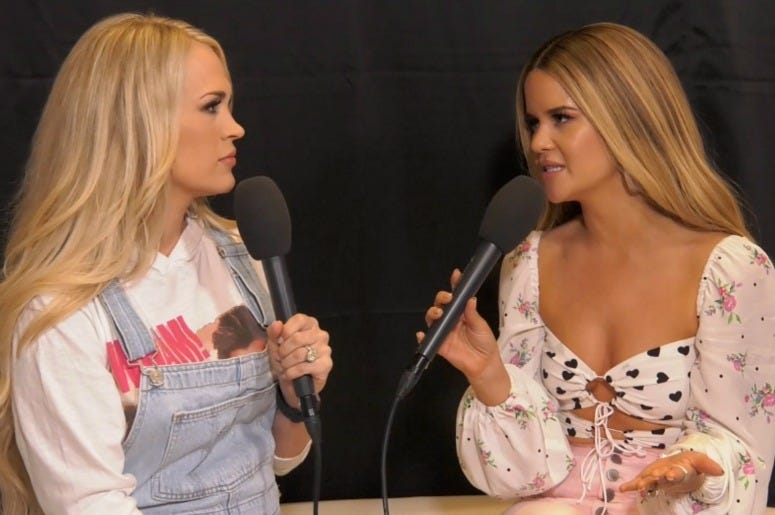 “Are we going to remember the lyrics for our CMA performance?” asks Charles Kelley of Lady Antebellum. With a shake towards the truth, Hillary Scott shares what’s been revealed. “My reply is no.” Sorry guys, don’t blame the 8-Ball. You probably did this to yourself.

Ryan Hurd employed the power of the 8-Ball to get some answers for his wife, Maren Morris.

“Will Maren win ‘Female Vocalist of the Year?’” he asks. But the timing wasn't right and the 8-Ball wasn’t ready. “Ask again later. What?”

Meanwhile our friends in Midland had more pressing problems that they needed solved. “Will Thomas Rhett wear rhinestones on the red carpet?” questions Cameron Duddy. He too was met with an “ask again later,” because magic is a fickle mistress and believes time is a construct.

Thomas Rhett on the other hand was more concerned with how his children would behave on the red carpet. “Will my daughters throw a fit on the red carpet?” he asks, not in rhinestones for what it’s worth. “Yes definitely” the 8-Ball replies. “That’s good to know.”

Everyone came to the Magic 8-Ball looking for something different. There was Devin Dawson who wanted to know his chances for Song of the Year, there was Old Dominion who found out they somehow have a chance for Female Vocalist of the Year, and Dan + Shay who just wanted a hug from Reba McEntire. “You may rely on it,” Shay calls out after getting his answer. “Wow. That’s unbelievable.”

The reigning Entertainer of the Year used his question for friend and collaborator Eric Church. “Will Eric Church win ‘Female Vocalist of the Year?’” Keith Urban asks the 8-Ball. “Better not tell you now,” Keith reads from the 8-Ball. “So Eric, you’ve got a chance.”

Elsewhere the 8-Ball told us quite a bit about Keith Urban, not only about his chances for Entertainer of the Year, but about the possibility of fishnets for the “We Were” singer. You’ll have to watch the entire exclusive RADIO.COM video above for all the details, but as Urban explains, there’s always a caveat when it comes to the Magic 8-Ball.

“So just know, if it gives you the answer that you want, these things are legit,” Urban tells us. “If it doesn’t they’re just nonsense.”

For further proof, revisit some of Magic 8-Ball's finest moments from 2018 in the video below. Sure it wasn't right most of the time, but really, who are we to say what's right and what's nonsense?

We’ll find out for sure at the 2019 CMA Awards, happening on Wednesday November 13 at 8PM ET / 7PM CT on ABC. Be sure to check out our coverage hosted by Luke Combs, including the CMA Red Carpet Countdown one hour before the show starts, right here and on the RADIO.COM app.