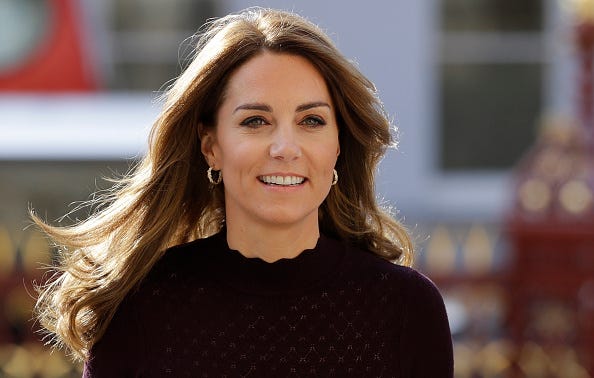 Dressing like the Duchess of Cambridge just got a whole lot more inexpensive.

With the Thanksgiving holiday upon us, one of Kate MIddleton’s favorite mid-level fashion labels, L.K. Bennett, has unleashed a massive Black Friday sale, according to Page Six.

.@LKBennettLondon, one of Kate Middleton’s longtime favorite labels, is having a major sale on #BlackFriday . https://t.co/exZsEZ1J5Y

Kate has sported outfits from the British designer on over 40 occasions since marrying Prince William and becoming a member of the royal family in 2011.

She was most recently spotted wearing the brand’s Gabrielle Coral Print Midi Dress at a ceremony honoring student finalists of the BBC 1 Radio Teen Awards alongside pop star Camila Cabello.

Radio 1’s Teen Heroes of 2019 visited The Duke and Duchess of Cambridge at Kensington Palace earlier this month, along with chart-topping superstar Camila Cabello and BBC Radio 1 DJs Clara Amfo and Greg James. Now in its tenth year, @bbcradio1’s Teen Awards is the biggest teen event in the pop music calendar and shines a light on some of the UK’s most inspirational teens, seeing them crowned Teen Heroes of 2019 in front of an audience of 14-17 year-olds. This is the fourth consecutive year that Radio 1’s Teen Heroes have been honoured with an invitation to the Palace. The ten finalists were greeted by The Duke and Duchess, who praised them for their inspirational work and their dedication to helping others. #R1TeenAwards

Fans looking for that very dress can use the code BLACK25 to get 25% off the frock which normally sells for $645. If you’re doing the math, that means the royal gown could be yours for just $484. While that isn’t as affordable as say Old Navy, it’s also not as out of reach as the high-end fashion houses.

The code is eligible for discounts on EVERYTHING on the site, including new and sale items.

Another personal favorite of Kate’s are the Fern Beige Suede Pointed Toe pumps which have a pre-sale cost of $295, but with the discount they come out to $222. Not a bad price to walk in Duchess’ shoes!

No matter the occasion, you'll find yourself reaching for the Gabrielle dress. Tap shop #LKBennett

The brand’s minimalist elegance is partly why the Duchess has been a champion of the label.

“I think the reason [L.K. Bennett] is associated with the royals is because it offers an understated, anonymous sense of chic,” a Harper’s Bazaar fashion editor previously told the New York Post. “It’s elegant — just right for the occasion — but you don’t know where it’s from.”

Although L.K. Bennett used to have shops in the United States, they recently closed their North American stores. The Black Friday sale is available for purchase online now, with a $15 delivery fee for U.S. orders.