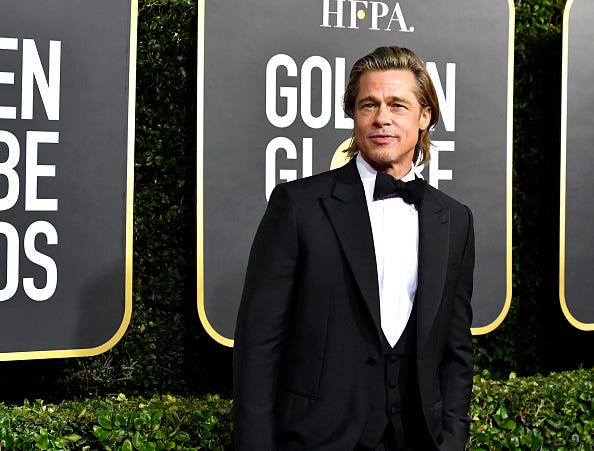 Brad Pitt may be excelling in his career, but according to him, his personal life isn’t doing so well.

Pitt and his "Once Upon a Time in Hollywood" co-star, Leonardo DiCaprio, appeared on Marc Maron’s “WTF” podcast on RADIO.COM when the actor referred to his personal life as a “disaster.”

“I'm just like trash mag fodder! I don't know -- because of my disaster of a personal life, probably. Most likely,” Pitt joked, explaining why he believes the media has an insatiable obsession with his personal life.

Though published Monday, the interview took place prior to Pitt’s Golden Globes win for Best Performance by an Actor in a Supporting Role in a Motion Picture for his role as Cliff Booth in the Quentin Tarantino-directed film.

Pitt had the same sense of humor during his acceptance speech on Sunday night as he joked about the media's interest in his dating life.

The actor said he wanted to bring his mother to the show but didn't because “any woman I stand next to they say I’m dating. And that would just be awkward.”

Pitt’s ex-wife and Apple TV’s “The Morning Show” star, Jennifer Aniston, cheered him on during the speech.

The tabloids were buzzing after Pitt was seen attending Aniston’s 50th birthday and annual Christmas Party, however, the actor clarified the rumors to Entertainment Weekly calling his ex-wife a “good friend.”

In addition to Aniston, two of Pitt’s former exes, Gwyneth Paltrow and Christina Applegate, were also in attendance at the awards show.

Listen to more from the "WTF with Marc Maron" podcast on the RADIO.COM app.