Backstage after a vibrant performance and Elton’s first victory at the Oscars in 25 years, the pair couldn’t help but praise the other nominees.

“These awards sometimes can be crapshoots, there’s a lot of other great songwriters involved in this,” Elton explained to RADIO.COM. “Randy Newman, Cynthia Erivo, Diane Warren, and the Lopezes. They’re all great songwriters and they’re all sweet people. To be in great company is wonderful, to win it is even better.” 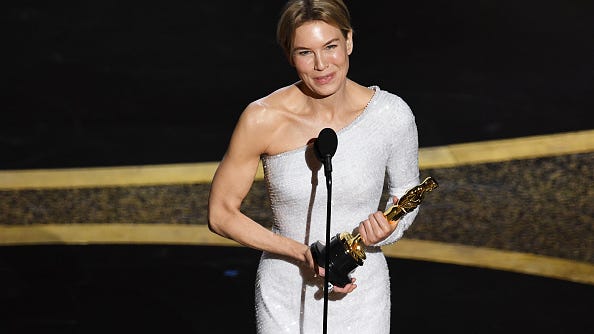 “There’s a reason those people get nominated again and again,” added Taupin, Elton’s writing partner for years. Rocketman is very much the story of their relationship, so it’s a fitting win for the longtime collaborators.

“Diane’s gonna win it one day,” Elton continued, speaking of Warren who has been nominated 11 times for Best Original Song. “I hope she does. Now I’ve won this, Diane go ahead and win it.”

Elton John had to make an early exit from the ceremony, making his way over to the 28th edition of his AIDS Foundation Academy Awards party, but not before he was crossed paths with surprise guest Eminem. The rapper shocked viewers with a performance of “Lose Yourself” during the awards, and the two who have helped each other in the past were able to catch up briefly backstage.

I got to see my Uncle Elton tonight at the Oscars. Congrats on your win too, Sir! @eltonofficial pic.twitter.com/9HsQHvGzM4