As the holiday season wraps up, the 2020 award season is in full swing with the first televised award show of the year – the Golden Globes.

If you spent most of 2019 binge-watching shows and movies, you’ll want to tune in on Sunday as the Golden Globes honor achievements in both television and film.
With streaming services offering a healthy dose of competition (and snagging four out of 10 major film nominations), the results of the Golden Globes could pave the way for for streaming success at the upcoming Oscars.

Below are a few things to expect at the 2020 Golden Globes, and where and when you can watch the festivities. See the full list of nominees here! 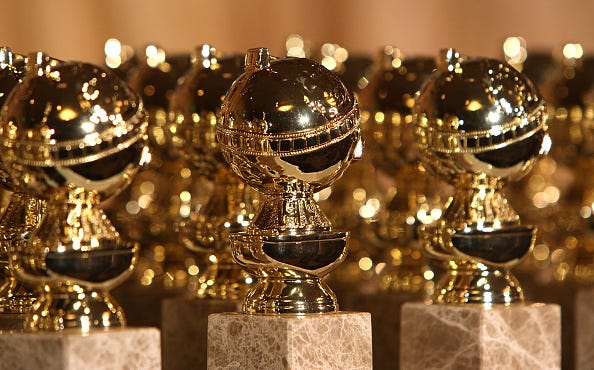 Where and when to watch

﻿Here are the logistics for this weekend's show:

The streaming wars continue to get more and more competitive, but when it comes to award shows, Netflix is a clear winner. The streaming giant didn’t just dominate in the television categories but also scored a W in the film categories. The drama “Marriage Story” scored a total of 6 nominations and even highlighted the incredible work of Adam Driver, Scarlett Johansson and Laura Dern. Netflix’s “The Irishman” scored five nominations while “The Two Popes” trailed with a total of four.

For the North!
Congratulations to Kit Harington on his “Best Actor - Drama” nomination at this year’s #GoldenGlobes pic.twitter.com/9Ut4FqeMM9

The final season, specifically the final episode, of “Game of Thrones” was highly divisive, but it’s still surprising that the series was almost completely glossed over for the 2020 Golden Globes. The series earned one measly nomination for Kit Harrington (Jon Snow) as “Best Performance by an Actor in a Television Series (Drama),” a stark contrast to the 32 nominations the HBO series earned at last year's show. All good things must come to an end.

Ellen DeGeneres will receive the Carol Burnett Award at the 2020 Golden Globes. https://t.co/1tmSgCTajI

During the show, comedian and daytime show host Ellen DeGeneres will be honored with the Carol Burnett Award, the show’s version of the lifetime achievement award. She will be the second person to receive the award, the first being Mrs. Burnett herself in 2019.

Tom Hanks will also accept the Cecil B. deMille Award. "For more than three decades, he's captivated audiences with rich and playful characters that we've grown to love and admire,” the Hollywood Foreign Press Association said.

Could not be prouder to be recognized by the #HFPA. Ramona was a complicated character and it was an honor and challenge to bring her to life. Hustlers was a labor of love, sweat and perseverance written, directed, produced, edited and starring a group of bad-ass women. I am proud and honored to represent them and this film!!!! ♥️♥️ @goldenglobes #HustlersMovie #Ramona Thank you so much Hollywood Foreign Press Association!!! ♥️♥️

There are plenty of history-making opportunities for the 2020 show. Meryl Streep is up for her 10th Golden Globes win for her role as Mary Louise Wright on “Big Little Lies.” Awkwafina could become the first Asian winner in the “Best Comedy/Musical Actress” category for “The Farewell.” Billy Porter could become the first openly gay African-American to take home the Best Actor award for the FX period piece, “Pose.”

And lastly, Jennifer Lopez could bring her first Golden Globe Award home for her role as Ramona in the stripper drama “Hustlers.” It’s been 20 years since she was last nominated in 1998 for playing the late Tejano singer Selena Quintanilla-Perez in the 1997 musical drama "Selena."