The 26th annual SAG Awards went down on Sunday night.

And yes, while we finally got the Brad and Jen moment we’ve been waiting for all awards season, there’s still a ton left to recap from the night’s ceremonies.

These are the best moments from the 2020 SAG Awards.

We are honored to have each and every one of these actors with us tonight 🤩 #sagawards pic.twitter.com/m3u09hG1o0

The comedy legend kicked off the show’s I am an Actor segments in which stars poignantly reflect on their careers.

But unlike the bite-sized nuggets of his peers, Levy offered up a long, rambling response.

His son, Dan Levy, tried to reel him in, saying, “You’ve used up so much time they’re telling us they have to cut Tom Hanks.”

That’s when the camera abruptly cut to Hanks, whose face was stunned with confusion and insult.

Congratulations to Phoebe Waller-Bridge for receiving the Actor® for Outstanding Performance by a Female Actor in a Comedy Series. Although the show isn't considered autobiographical, Fleabag is a name Waller-Bridge is called by her family. Flea, for short #sagawards @fleabag pic.twitter.com/lI3owImUR0

It has been Phoebe Waller-Bridge’s year.

“Fleabag,” the highly-acclaimed dark comedy series that she created and stars in, took the Emmys by storm in September, snagging four awards.

Tonight, she won the award for best female actor in a comedy..

During her speech, Waller-Bridge gave a heartfelt thanks for the overwhelmingly positive reception of her show in the States.

“Thank you for being so supportive of our show on these shores,” the overjoyed actress said.

She went on to marvel that she would “spend this evening with all of you amazing actors in a room I never imagined I would ever be in.” 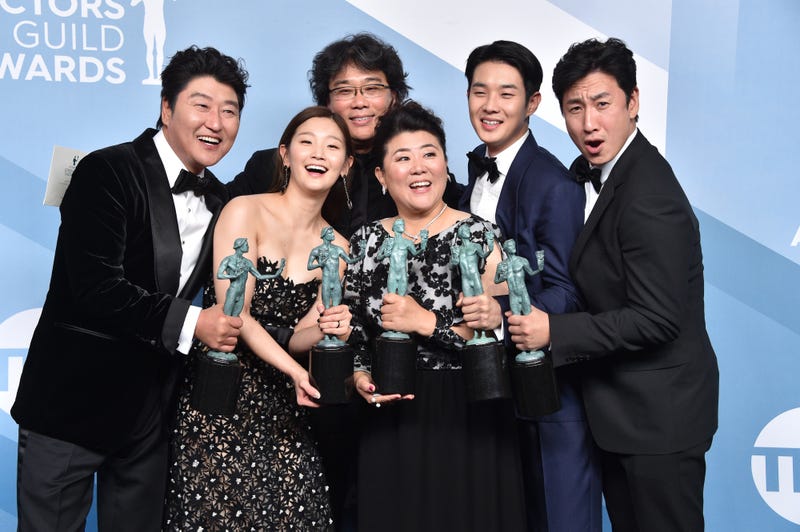 The cast of "Parasite" received a standing ovation when they presented a glimpse of their film.

The energy in the room was telling, as the movie went on to win the best ensemble cast award.

It was a record-setting victory — “Parasite” became the first foreign-language film to win the category.

In his acceptance speech, the film’s lead Song Kang-Ho said, “Although the title is ‘Parasite,’ I think the story is about co-existence, and how we can all live together.”

His co-star Choi Woo-shik commented on the future implications of their win. “I really truly hope that after this moment, maybe next year, we can see more foreign-language films and Asian films,” he said.

Brad Pitt had the zingers ready when he won the award for best supporting actor.

“I gotta add this to my Tinder profile,” the 56-year-old started his acceptance speech.

Pitt joked about not relating to his character in “Once Upon a Time in Hollywood,” sarcastically calling the "difficult part" about the "guy" who "doesn't get on with his wife" a "big stretch."

Cameras cut to Jennifer Aniston, who was smiling at her ex-husband’s funny banter. 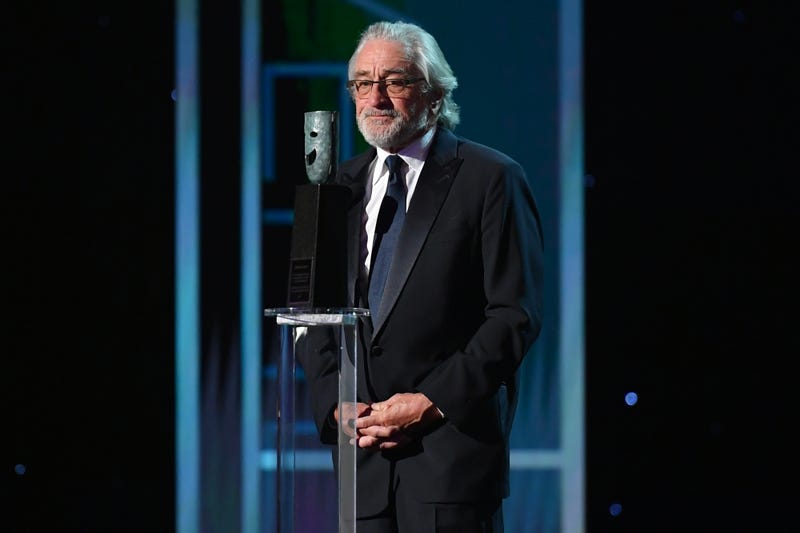 Robert De Niro was celebrated for his 54-year career with a life achievement award.

The award was presented by Leonardo DiCaprio, who affectionately referred to the recipient as “Bob.”

De Niro got political in his speech. A vocal Trump critic, the actor said it was his duty to speak up.

“if I have a bigger voice because of my situation, I'm gonna use it whenever I see blatant abuse of power,” he said.

What a reaction 😂 #sagawards pic.twitter.com/ldkRFAqIsE

Sam Rockwell took home the award for best actor in a TV movie or limited series for his turn in “Fosse/Verdon.”

The best part of his win was his girlfriend Leslie Bibb’s reaction.

Bibb’s knee-jerk response was unbridled joy. She pounded on Rockwell’s chest and squeezed his arms before setting him off for his speech.

Rockwell was somewhere between perfectly calm and totally confused on his way up. But on stage, he passionately thanked his partner of more than ten years.

“My beloved Leslie Bibb, for reading scripts with me during the Christmas break,” he said. “Thank you. I love you very much.”

"I'm standing here on the shoulders of my favorite actor Heath Ledger." Joaquin Phoenix thanks the late #DarkKnight star while accepting the #SAGAwards statue for #Joker https://t.co/tD2ozkArqi pic.twitter.com/k9q8hwFFrM

Joaquin Phoenix won best leading actor for his role in the controversial “The Joker.”

On stage, Phoenix individually thanked Leonardo DiCaprio, Christian Bale, Adam Driver and Taron Egerton, the four men he was up against.

But at the end of the speech, he thanked Heath Ledger, who portrayed The Joker in “The Dark Knight,” his final role before his untimely passing.

"I'm standing here on the shoulders of my own favorite actor, Heath Ledger," Phoenix said.