People can’t get enough of Chrissy Teigen and John Legend.

Sure, it’s tempting to think of them as the fun couple you want at the party. But Teigen and Legend have a storied romantic history, from meeting on the set of a video shoot to having each other’s backs all the way to an iconic Vanity Fair family cover.

To cap off the couple’s eventful 2019 and celebrate Legend’s birthday — which is Dec. 28 — these are some of the couple’s best moments from over the years.

Life imitated art after Chrissy played John's love interest in the video for his single "Stereo."

The chemistry between the two was fiery and undeniable.

"We did the music video, we were together for like 12 hours," Teigen explained to Wendy Williams in 2014. "We spent the entire day together, me in my underwear and him in a full suit, and I went to go say goodbye to him, to his hotel and we didn't ever say goodbye that night." 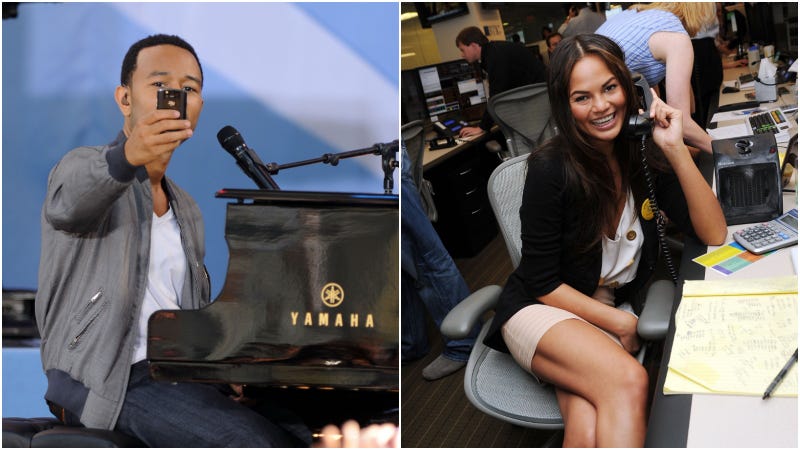 After their fateful meeting, the two kept in touch, texting each other and speaking ferquently on the phone.

Chrissy tried playing the cards close to the vest at first. "I let him be himself for a while," she said. "The worst thing you can do is try to lock someone like that down early on, then have them think, 'There's so much more out there.' I played it cool for a long time. Never once did I ask, 'What are we?'" 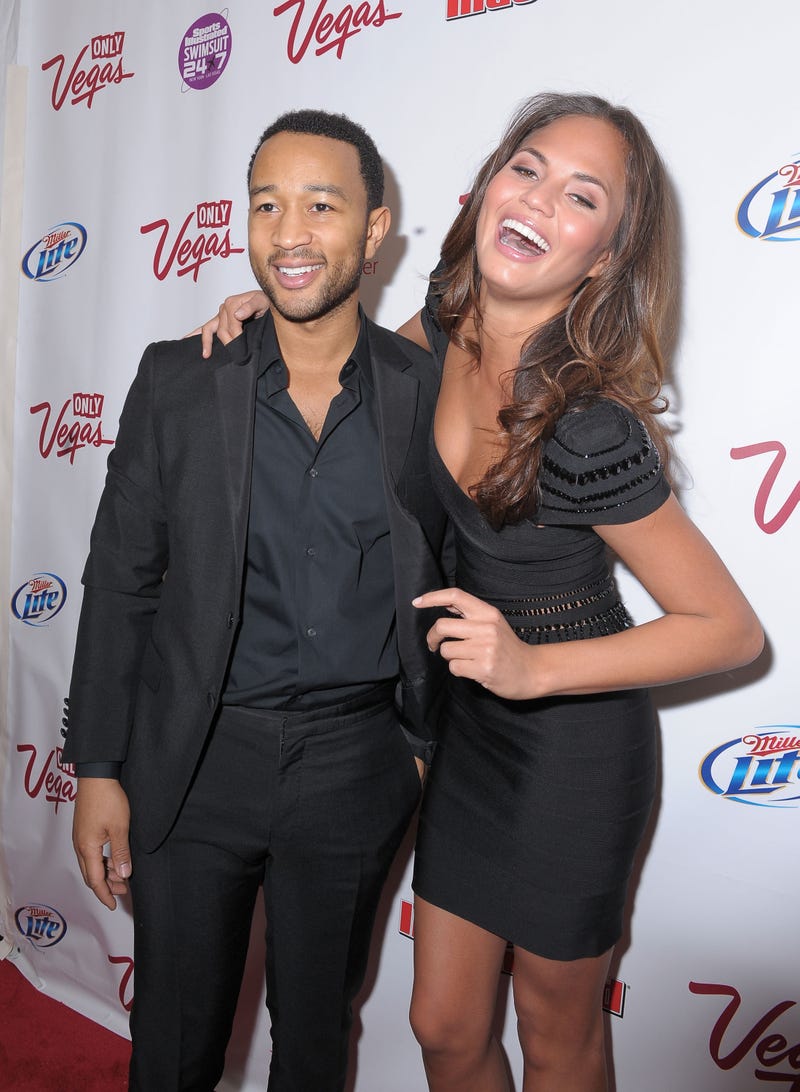 Their early courtship wasn't without its rough patches. Shaken up by the demands of touring, John got cold feet and tried breaking things off with Chrissy. It lasted about a day.

"I was on tour with him and he’d gotten sick," Teigen explained to Cosmopolitan in 2016. "He was feeling really bummed and stressed out. He was like, 'I can’t be in a relationship right now.' That lasted for one day. Literally, a day. I knew it came from a place other than us not working. It was the stress of him having to maybe cancel a show, and he had never been in a real relationship—or so he says now. I always joke, 'Remember when you tried to break up with me?' He’s like, 'Yes, sorry. Big mistake.'"

Chrissy's account has been corroborated by John himself. He even said it was more like an hour, not a full day, in 2017. "I was just like: 'I'd just be happier single right now,'" the singer said. "And she was like: 'No.'"

Back to where it all began - Lake Como, Italy - first came here in 2007. A boat tour guide took us to a little spot on the lake and told us to make a wish. I asked for this to be the man I marry and have children with. I think John asked for the most perfect bite of cacio e pepe. Both came true, and here we are.

2007: They take their first trip together to Lake Como.

Vacay status! The lovebirds took a trip to Lake Como, Italy in 2007. The destination would be the site of their future wedding.

In 2016, Teigen shared a photo of two from the trip. The sweet, funny caption described how their fate was sealed during this getaway: "A boat tour guide took us to a little spot on the lake and told us to make a wish. I asked for this to be the man I marry and have children with. I think John asked for the most perfect bite of cacio e pepe. Both came true, and here we are." 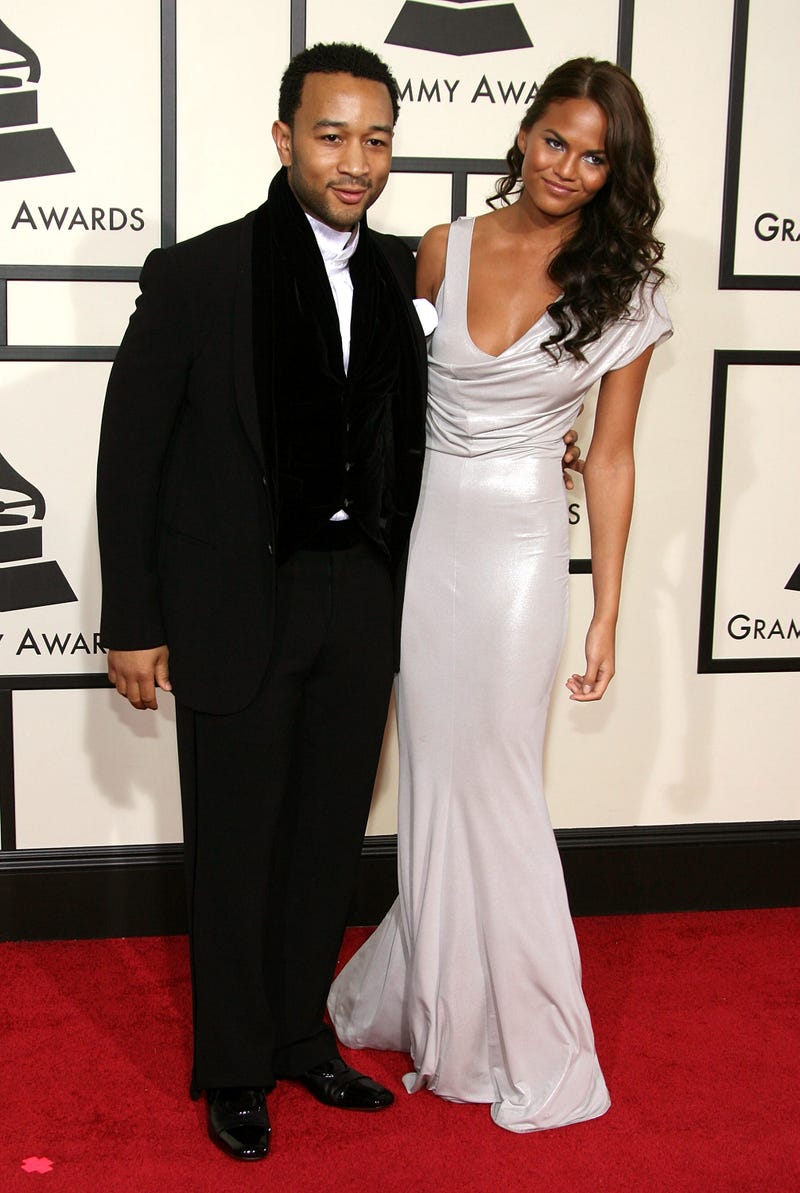 In 2008, John and Chrissy made their red carpet debut as an item at the GRAMMYs. 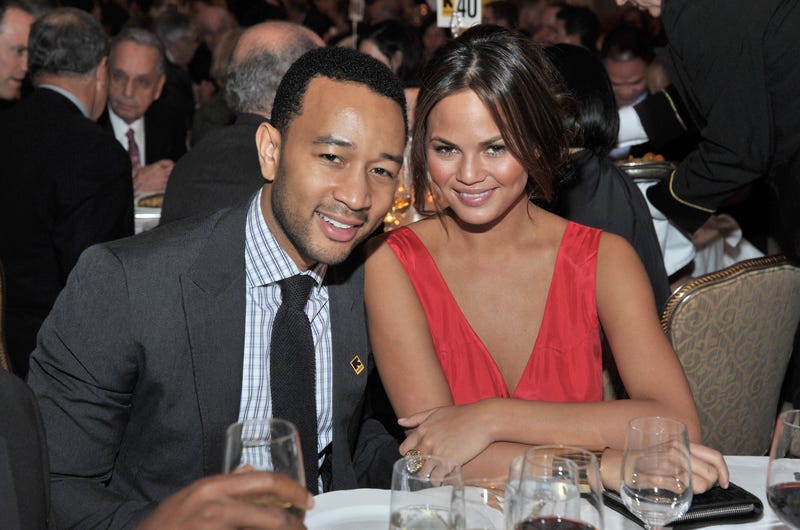 John and Chrissy one month before their engagement, November 2011 Photo credit Getty Images

December 2011: John proposes to Chrissy in the Maldives.

Chrissy got a great gift on Christmas in 2011 — even though she wasn't too thrilled at the lack of other presents.

"I remember we got into a very big fight in the car on the way to the airport because we had opened our presents beforehand, and he had only gotten me a cookbook and a Crock-Pot," Teigen said on FABLife. "I remember him going, 'You just wait!' And I was like, 'Wait for what?!'"

John was tense when airport security almost ruined the surprise. He explained to Oprah that they wanted to look through his carry-on bag and look inside that particular box while Chrissy . was standing next to him.

Thankfully the jig was not up. The coupled got to the Maldives, where John pulled the proposal off without a hitch. Teigen described the emotional moment: "We get to the Maldives and he had planned this beautiful Christmas. He knows how much I love Christmas, and this waiter comes out with a silver dome for dessert. So he opens up the dome and a ton of arugula falls out and then I kind of fish in it, and I see the little box and then you know—your heart stops and you get so excited,” Teigen said. “There was no big grand speech or anything. I think it was just very lovely and sweet.” 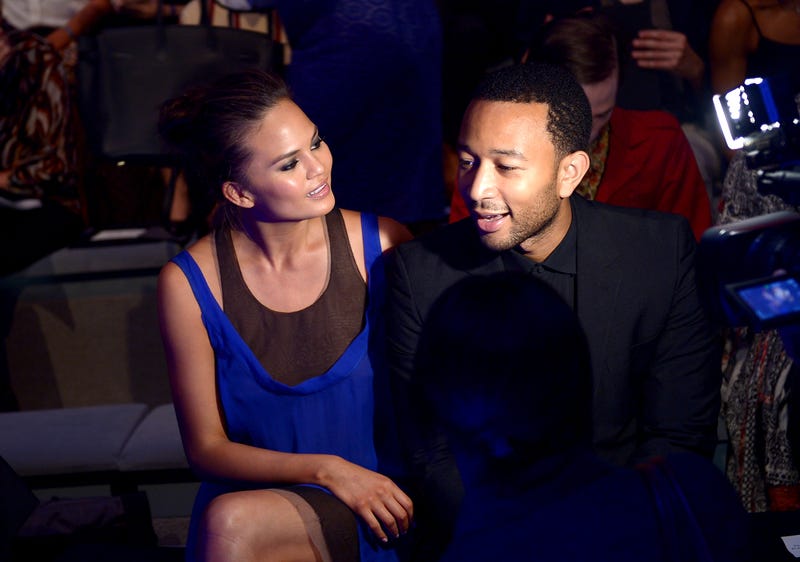 Procrastination doesn't get more glam than this. The couple check out the fits at New York Fashion Week moments before their courthouse wedding on Sept. 10, 2013. Photo credit Getty Images

September 10, 2013: The couple gets hitched at a courthouse in New York.

Days before their wedding ceremony in Italy, the two realized that they needed to get their marriage license in America first. After hitting some New York Fashion Week shows at Vera Wang (who designed Chrissy's wedding dress), John and Chrissy made their way to a courthouse for a quick and dirty ceremony, with model Irina Shayk serving as a witness. "We are dumb and didn't realize our Italian wedding would not be recognized unless we had a real ceremony in New York City," Chrissy explained.

Legend and Teigen made it official-official in Lake Como. The two got married with a ceremony that John described as "rustic-chic, elegant-but-not-too-glossy" — basically idyllically Italian.

And of course, Lake Como was a special destination for the star couple. "One of the first vacations we took together was to Lake Como, so we thought it would be nice to marry where we fell in love," Legend revealed.

2013: The couple films the video for 'All of Me,' Legend's ballad dedicated to his wife.

"All of Me," one of Legend's hugest songs, is dedicated to his wife Chrissy. The two shot the video for the ballad months after their nuptials, combining black-and-white footage from their time in Lake Como with clips from their actual marriage. Teigen told Huffington Post that she knew the song had to be about her from its first line: "What would I do without your smart mouth." She also said the song made her unexpectedly emotional: "I did cry when I heard it. I'm emotional, but like I don't really don't cry at things like that so yeah, it was beautiful. And live it's pretty unreal."

John and I are so happy to announce that we are pregnant :) As many of you know, we've been trying to have a baby for a while now. It hasn't been easy, but we kept trying because we can't wait to bring our first child into the world and grow our family. We're so excited that it's finally happening. Thank you for all your love and well wishes. I look forward to all the belly touching! Xx

Oh baby! Teigen announced that she became pregnant in a touching Instagram post. Teigen, who has been open about her challenges with infertility, shared that they would be welcoming their first child through IVF. In the caption for the announcement, she proudly gushed: "As many of you know, we've been trying to have a baby for a while now. It hasn't been easy, but we kept trying because we can't wait to bring our first child into the world and grow our family. We're so excited that it's finally happening. Thank you for all your love and well wishes. I look forward to all the belly touching!"

John and Chrissy welcomed their daughter Luna Simone Stephens into the world in April 2016.

Teigen opened up about her struggles with postpartum depression after Luna's birth in an article she wrote for Glamour, saying that John's support helped her through the difficult time. "I know he must look over at times and think: My God, get it together. But he has never made me feel that way," Teigen said in her vulnerable essay. "I love John and Luna more than I can imagine loving anything, and John and I still hope to give Luna a few siblings. Postpartum hasn't changed that."

Teigen announced her second pregnancy in a video on Instagram that featured a cameo from Luna. "What's in here?" Teigen asks, pointing the camera towards her belly. "Baby," Luna sweetly chirps in response. Like Luna, the second child was also conceived through IVF.

Hello, world! This is Miles Theodore Stephens - We are drowning in his little peeps and nuzzles. Our household feels overwhelmed with love. Thank you for all your well wishes!

"Somebody's herrrrrrre!" Chrissy announced in a tweet a few days before sharing the first pic of their second child, son Miles Theodore Stephens.

my incredible man. what a surreal life.

September 10, 2018: Legend becomes a GOAT when he gets on EGOT status.

Five years to the day after their New York courthouse marriage, John enjoyed a truly legendary moment when he became the first African American man ever to achieve EGOT status (winning an Emmy, Grammy, Oscar, and Tony Award). In a proud, simple and doting Instagram post, Teigen congratulated John: "my incredible man. what a surreal life."

12 years ago today, I met the man of my dreams. And 5 years ago today, we got married. We have two babies and some pups and a life I am grateful to have. My everything, I love you and am so proud of the story we’ve created. But you are an asshole for releasing your @nbcthevoice news on my target launch day for real

The couple that plugs together, stays together! Chrissy and John both posted touching-but-funny Instagram posts celebrating each other on their fifth wedding anniversary. Teigen quipped that she loved John even though he made his "Voice" announcement on the day of her Target kitchenware line launch. John made no bones about it in his post, saying he loves his wife and "I LOVE your new kitchenware line at @Target."

The marriage of @johnlegend and @chrissyteigen makes for a modern-day fairy tale: an unabashedly successful couple who together have overcome childhood pain—and aren’t about to back down from a presidential tweetstorm. Read our December cover story: https://t.co/Tx6dz1yy5s pic.twitter.com/hDn1x3tURo

October 2019: The fam makes the cover of Vanity Fair.

The parents and their kids landed the cover of Vanity Fair, which featured a revealing story about the family, their success and even some politics. They were hailed as "The First Family We Deserve" on the issue's cover.

I cannot WAIT for people to get mad about John being the sexiest man alive. it's my new Starbucks holiday cup

November 2019: John is People's Sexiest Man Alive of 2019 — and Chrissy defends him against the haters.

John was named People's Sexiest Man Alive of 2019. But despite the accolade, he had some famous detractors, including Wendy Williams and Barbara Corcoran of "Shark Tank." Chrissy had her husband's back, though. She tweeted that she "cannot WAIT for people to get mad about John being the sexiest man alive." And when Corcoran commented "Now this is something I can agree with" on Snoop Dogg's hilarious version of the cover with his head photoshopped on John's body, Teigen clapped back: “Barbara are you ever gonna stop talking about this."