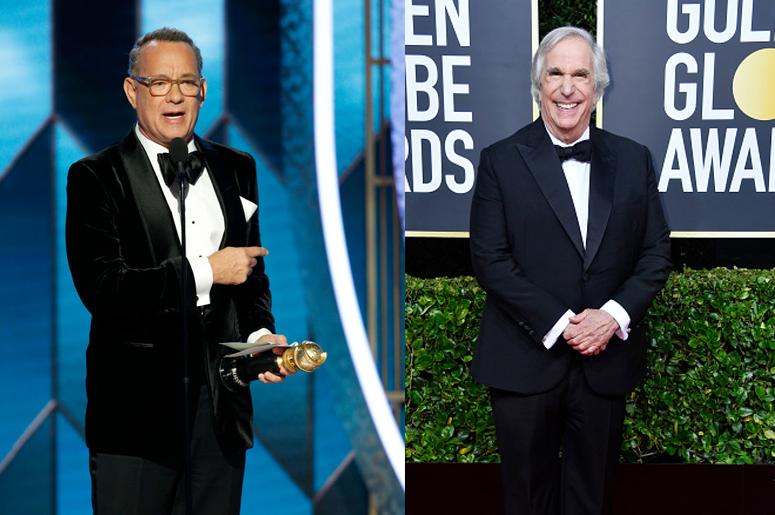 Ricky Gervais threw tons of shade at the 77th Golden Globe Awards last night as he hosted the ceremony, but his jokes paled in comparison to the subtle-yet-telling expression on Henry Winkler’s face during Tom Hanks’ acceptance of Cecil B DeMille Award.

And no, you didn’t imagine it, it happened during Hanks’ speech as the camera panned briefly to Winkler revealing that he may have been the only member in the audience not enamored with the Hollywood nice guy.

It’s hard to imagine that anyone would have any resentment towards either Hanks or Winkler, but if you look at their history, the moment isn’t exactly shocking.

According to Page Six, Winkler and Hanks have been feuding for “over three decades.”

The feud dates back to 1989 and specifically, the set of “Turner and Hooch.”

Winkler only served as the film’s director for 13-days before getting let go.

On a 2019 episode of “Watch What Happens Live with Andy Cohen,” Winkler suggested that Hanks had something to do with his firing.

The 74-year-old opened up about the beef stating, “I was directing that movie for 13 days and then I was called into (producer) Jeff Katzenberg’s office and he said, ‘You have everything with you? Go home.’”

Winkler threw even more shade when he added that he got along great with one of the film’s cast members, the slobbering French Mastiff.

“I got along great, great with that dog,” he recalled on WWHL. “Love that dog.”