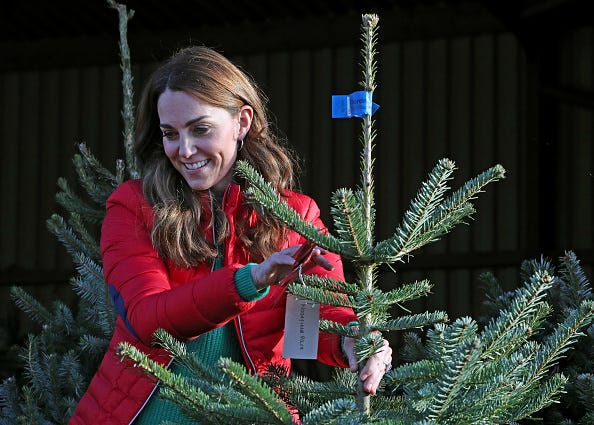 Kate Middleton is very particular about her Christmas trees.

The Duchess of Cambridge paid a visit to England’s Peterley Manor Farm to help young children pick out Christmas trees and gave some insight as to how she’ll be decorating Kensington Palace over the holidays.

Today, The Duchess of Cambridge became Royal Patron of @Family_Action. Her Majesty The Queen @TheRoyalFamily has passed the patronage to The Duchess having held the role for over 65 years. The Duchess joined children and families supported by Family Action at a Christmas tree farm and helped them to make Christmas decorations, eco-friendly reindeer food, and post their letters to Father Christmas! Her Royal Highness also helped the children find Christmas trees for Family Action pre-schools, before heading back inside for some hot chocolate. Family Action was founded in 1869 to help families in difficulty by giving them practical help and support. The charity works directly with vulnerable or disadvantaged children and families, and provides services including perinatal mental health services, counselling and therapeutic support, and the mentoring of children, young people and adults. The new patronage aligns with The Duchess’s longstanding work on the early years, and the importance of supporting children and families during this seminal period of their lives.

“She was asking about the trees which drop their needles and those that don’t, and which ones smell nice!” the farm’s owner Roger Brill told People.

“She said that they normally have the Nordmann Fir inside that doesn’t drop the needles.”

Kate obviously doesn’t want Prince George, Princess Charlotte and Prince Louis getting any pricks from any loose needles as they open presents on the palace floor.

The 37-year-old’s outing came as part of her new role with the Family Action charity which gives practical help and support to families in need.

The Duchess had no problem doing physical labor and held up trees while interacting with the various children at the event.

“She was fantastic with the youngsters. She was in there moving them around and holding them up,” the farm’s owner added.

“I will have to give her a job at the weekend, I think. She was a very good saleswoman,” he said jokingly.

You’re invited to a very special Christmas party! Join the Duke and Duchess of Cambridge and Mary Berry as they serve a festive feast to say thank you to charity staff who work across the holidays. ✉️🎄❤️️ @kensingtonroyal #ABerryRoyalChristmas | Monday 16th December | 8:30pm | BBC One and BBC iPlayer.

As always, Kate was impeccably dressed and completely in the holiday spirit decked out in  a red ski jacket and green sweater to make the outing extra festive.

Her tree excursion came just days after it was revealed she and Prince William will appear in the upcoming BBC holiday special entitled "A Berry Royal Christmas."

The royal couple will join former judge of “The Great British Bake Off” Mary Berry to make a delicious Christmas feast for the selfless volunteers and staff of various charities who are helping others this holiday season.