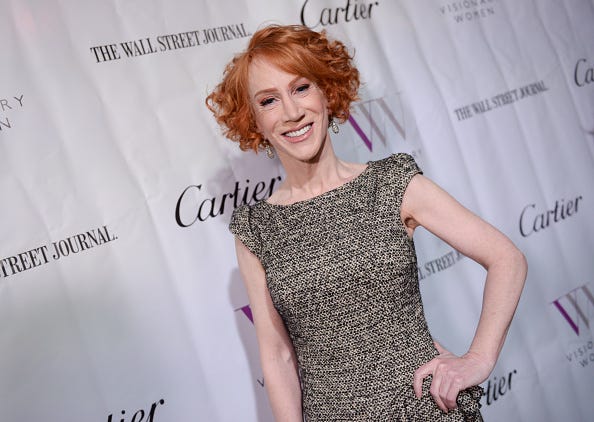 Griffin took to Twitter Wednesday to reveal a portion of the wedding ceremony which “was just under 14 minutes,” according to the tweet. The video shows the first minute or so of her marriage, hilariously officiated by Lily Tomlin.

“What was supposed to be a shallow, ‘toot it and boot it’ one-night stand has grown and flourished into something far more meaningful,” Tomlin began. “They stayed together. Then they couldn’t stay away from one another.”

The entire ceremony was just under 14 minutes but I have to give you guys the uncut first 75 seconds. LOVE IT! We promised you atypical. We are in love and we cannot stop laughing. Thank you @LilyTomlin and Jane Wagner!#HappyNewYear pic.twitter.com/O5vOss3TCD

She captioned the video clip, “LOVE IT! We promised you atypical. We are in love and we cannot stop laughing. Thank you @LilyTomlin and Jane Wagner! #HappyNewYear.”

Griffin sported a white, short-sleeved gown with a black sash across her waist. She held a bouquet of red flowers in her hand, matching the boutenir on Bick’s lapel. In a separate tweet, Griffin revealed that that dress she was wore was actually the same dress she wore on their first formal date in 2011.

“I asked Randy to pick out which ever one of my long dresses was his favorite for any reason. He picked out this dress and showed me this photo. Romance is hotttt again,” the comedian shared.

A) This was our first formal date in September 2011! We are in the back of a limo provided by the one only @GloriaEstefan because her team arranged for me to surprise her as a back up “dancer” when she performed at the Alma awards! pic.twitter.com/Z9kNaQHFpY

The ceremony came just hours after Griffin revealed her engagement on New Year’s Eve in a tweet. “Happy New Year! And, surprise! We’re getting married! Tonight! After midnight!,” the two said in the clip.